Kevin Carlyon - High Priest of British White Witches, submitted by Evergrey. Kevin Carlyon is a tubby and arrogant witch with about as much magical power as a donut and nearly a hundred times as much cholesterol. What's even better is that he is a self-styled "lord of magic", casting his greasy fingers to and fro using his white magic to do things like "magically watch TV" and "magically microwave a burrito", and his personal favorite "pose dramatically for photos while thinking about TV and burritos".

I don’t mention my father very much as I didn’t really know him. I remember him taking me out one day and he picked up another woman. I asked my mum ‘why was daddy doing press ups on another woman’? I was angry and tearful. The following day my father’s shirt caught fire on the gas cooker! He had minor burns but was it coincidence or magic? 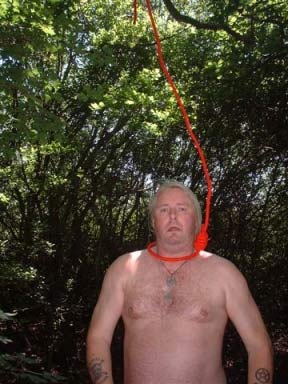 MY FERTILITY SPELLS ARE GOING GREAT AT THE CERNE ABBAS GIANT IN DORSET. WHY NOT POP ALONG THERE FOR SOME NICE NOOKIE - ITS THE 'IN PLACE'. 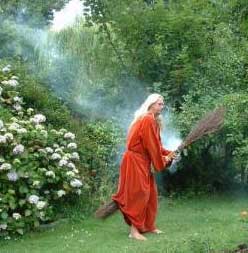 FOR THOSE OF YOU WHO KNOCK MY WEBSITE GET THIS:
Not only am I now claiming to be a God (simply because I believe that all males are part of the God figure and all females are part of the Goddess figure - those 'stuck in wrong bodies' or believe that they are born the wrong sex are abberations and don't count) I now know that I will be Immortal! I'd welcome your views on death, the afterlife, your hauntings or problems and do you believe in the image of the devil portrayed by the Church.

Kevin is immortal, he has inside him blood of kings, yeah! Kevin has no rival, no half-crazy porn-addicted man can be his equal in a pie eating contest! Unfortunately, Kevin does not have a guestbook, but I encourage you to peruse his site and e-mail him your feelings about his various forms of deviltry. I'm sure he can take time out of watching kidney pie congeal on his TV tray and listening to a soccer match - or as fags call it; "football" - on the AM radio he uses his witchcraft and possibly a potato to power.