New Generation Comics, submitted by KnightRayearth. If there's two things ol' Cliff absolutely fucking despises, it's the current generation of blockheaded mutant kids and comics. I steal the Patterson's paper almost every day, and almost every day I tear up the comics section and throw it into the garbage disposal and piss into it because I'm so angry at Beetle Bailey. That shitwit who draws Beetle Bailey should be run over by a fucking tank because his little idiot trap comic makes fun of the goddamn wars I FOUGHT IN and BRAVELY DEFENDED THIS COUNTRY from the commie Nazis and the Russians and Koreans and Russians and everybody else. Let me tell you something, World War II wasn't this sissy goofball love-in that Beetle Bailey wants you to think it was, I had to sit in a trench along the frontline for 19 days straight until the Krauts tossed in mustard gas and we all had to climb over the bodies of the French to get out. DOES THAT SOUND LIKE FUN?!? Well it wasn't, and neither are these batter dipped fuckclown comics. I can't even figure out what any of them are about, I think they're about how a bunch of 16 year old slimewad bloatpig teenagers can't get laid so they draw comics about themselves with fucked up faces and Mario Brothers orgy parties. I don't have any clue, but I know a turd when I smell it, and let me tell you, this computer screen stinks from a few hundred miles away.

We're a new and quickly growing network of online comics, with a special emphasis on giving new webcomicing talents early exposure to potential fans. We're always open to new membership if you're a webcomicer who's new to the field (click on "Join NGC!" for more details), but we're also looking for veteran webcomicers and other websites to support us, not with money, but with linkage (click "Link NGC!" for more details)! We've also got our very own phpBB-powered forums, so drop in and check out the community! ^_^ 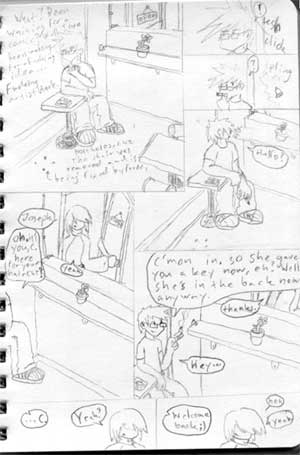 A whole slew of new comics here...that I've received over the course of the past, uh, month. Heh heh. ^.^ Gomen-asai~ (if that's how I should say it) for not getting them added sooner. There are two more also in the mix that need to follow up on a couple of things, and then they'll be up too. 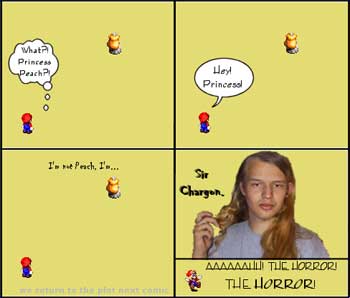 Seriously folks, what the crap is this shit? I've thrown up things that make more sense than these Intarweb disasters, and my puke looks at least 10 times better, yet you don't see me plastering pictures of my vomit all across the computer screens like these diseased hogwags. I thought that comic Beetle Bailey was a fucking trainwreck, but the hackjob slopheaps on this computer screen are at least a million times worse. Here's some creative advice for all you computer screen comic "artists" out there: TURN OFF YOUR COMPUTER MACHINE AND LEAVE YOUR GODDAMN HOUSE AND NEVER TOUCH A COMPUTER AGAIN AND DO SOMETHING CONSTRUCTIVE WITH YOUR LIFE, LIKE ENDING IT IMMEDIATELY.

If you want a list of all the comics on there that are utter and complete ratshit, just click on these underlined words here. It goes to a computer screen that lists all their comics and if you click those underlined words, mark my words, you'll fucking wish you were dead.