In 1996 Palladium set out to create a source book for Juicers, the surgically-altered drug addicts with shortened life spans and super powers of the Rifts world. Like most concepts in Rifts, what might have been an interesting idea was exploited and expanded into an elaborate mess of weirdness tangled up in detailed game mechanics. Rifts Worldbook 10: Juicer Uprising finally provided players the opportunity to live out their fantasy of being a gargoyle Juicer from Atlantis wearing rocket boots playing a sport called Juicer Football. 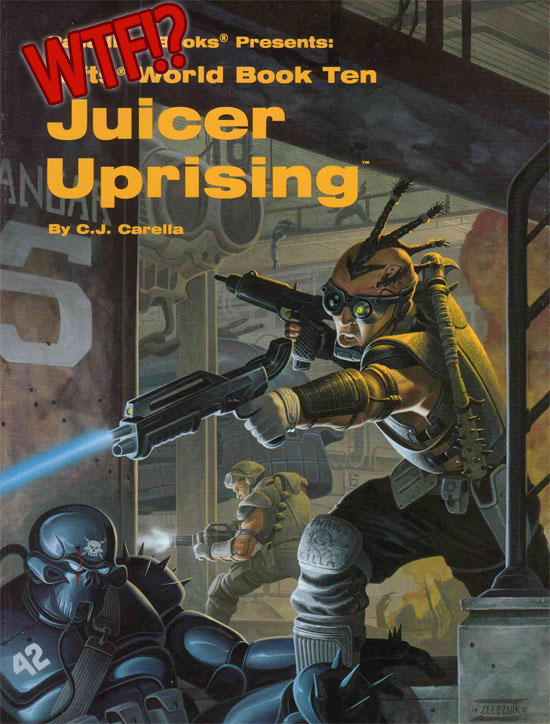 Steve: I wonder if Kevin Siembieda came up with the idea for Juicers while watching some steroid dude at the gym pump iron.

Zack: Like all of his ideas, including his concept of sexuality, it came from watching the WWF and being bullied by guys with mohawks.

Zack: That and daring to ask the big, metaphysical questions like, "What if the skull empire was fighting super junkies in the South West?"

Steve: When you think about it I guess the Coalition is like the oppressive conformity of society and the Juicers are the outlaw spirit.

Zack: The Coalition were such complex and well-rounded villains in Rifts. "I'm just trying to build a better future for my children!" *Stomps past in spider-legged skull robot shooting lasers at orcs.*

Steve: I think their argument was that the alternative was worse. Do you want to bow down to the skull robot overlords or do you want to end up a vampire in Mexico?

Zack: Sucking the blood of the United States with their plans for the Amero.

Steve: The Coalition just wants to create order out of chaos.

Zack: True. They want you to vaccinate your kids and put railings on your staircases. But before you know it you're in Chitown working in a factory building Juicer Killer Armor for the Juicer Wars and lapping up all the anti-steroid dragon alien propaganda.

Steve: And some moms think the vaccines might have turned their children into dog men.