"Disco Duck", submitted by violator. Sometimes some people just aren't cut out to be in the fast-paced, high-octane, deep-throating field of advanced lawyering like myself. I admit, it's a tough job and requires somebody with a lot of patience and brainpower, like that gentleman who routinely plays chess against computers built by tiny Asian people. If you feel you don't have what it takes to be a legal jockey like myself, you should be more than pleased to know that there's always a job waiting for you in the position of entertaining people with colorful duck calls. Reverend Charles Martindale is probably one of the leading experts in the field of musical duck calls, ranking up there with "Big Willy" Tucker and Aaron "Dead Wife" Flanhanaran.

Charles holds both the Bachelor of Music Education from Delta State College, and the Master of Church Music Degree from New Orleans Baptist Theological seminary. Charles has served not only as a Minister of Music in several churches, but also as a High School Band Director. 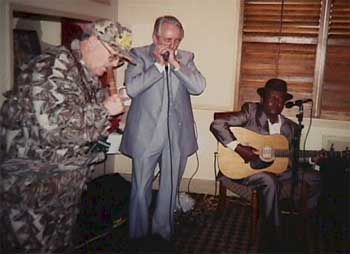 God has given Charles a very unique talent. He plays a variety of different kinds of Music on the Duck call and other game calls. Charles has played Classical, Folk, Swing, Big Band, Popular, Gospel Music, Hymns, Children’s Music, Patriotic, and Rock and Roll Music on the Duck call and other calls. His music selections played on the duck call and other calls include such songs as: Great Balls of Fire, Achy Breaky Heart, Purple People Eater, Raindrops Keep Falling On My Head, Wake Up Little Susie, How Much is that Doggy in the Window?, Top of the World, All the Gold, The Battle of New Orleans, Don’t Be Cruel, Wabash Cannon Ball, Puff the Magic Dragon, I’ll Fly Away, Marche From the Nutcracker, Trumpet Song, When the Roll Is Called up Yonder, First Day in Heaven, Bye Bye Love, Battle Hymn of the Republic, Hokie Pokie, Power in the Blood, and over 100 other songs.

To showcase what an excellent and selfless lawyer I am, I would like to take this moment and extend the following offer to Reverend Charles Martindale: if you would like to sue God for giving you such a horrible "very unique talent," I will take on your court case for absolutely no fee except for a sombrero and fake mustache for when I try to sue my way into Heaven.

PS: Please feel free to enjoy sound samples of his many entertaining duck call songs here. If there was some way to transfer the music on this computer to my cassette player Dictaphone, I would do so myself!