The Word of God

The Word of God, submitted by Justin. No introduction could suit this site better than the one from the site itself:

Who would dare create The Word of God .com ? Think about that question for a moment. Would Destiny allow just anybody to do that ?

Of course not! Destiny would only allow a complete and utter lunatic to do that! And that, my friends, is just what destiny did. I've dealt with fanatical religious sites before, and none of them come anywhere close to this one in terms of sheer insanity. There is not one sentence on the entire site that does not merit the question, "what the hell?" For example:

Your parents should be Thankful that the car that fell on their head did not kill them. As you know there is a reason for everything. Then you would have been Piper. See reality. People get away with nothing.

"Cops continue to Kill People In New York City Year 2000." A Fine example. The Mayor said "Facts change." Facts -Never- change or they would not be "Fact." They would be "Untruths." - Fact - Then on a clear blue day to The City came September 11, 2001. The World learned to feel more.

What the hell? This site claims to be the "official site of God." If that is true, then God really needs to take a web design course. Thewordofgod.com boasts randomly colored lines of text, bold or underlined words that have no business being bold or underlined, and a layout designed to make it as difficult as possible to actually follow the text from one paragraph to the next. Then, of course, there are the images. Photographs that seem semi-relevent are balanced nicely by hundreds of absolutely pointless gif's of basically anything. 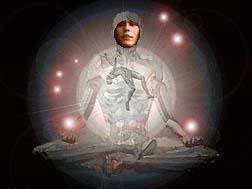 What the hell? I mean, come on! A robot? There's no rational argument for a freaking robot being on a religious website. I mean that literally - there is no rational argument. There is nothing in the text anywhere close to that robot that would signify any sort of need for it. If the pictures aren't enough to make you question your precious sanity, there's always the music. These days, a lot of sites that include incredibly annoying MIDIs have an option of disabling the eardrum-wrenching excuse for music. Not here. Thewordofgod.com wants you to hear every repetitive note in their endless loops of synthesizer-organ, synthesizer-harpsichord, and synthesizer-chorus. Each page has its own godawful music, each one more annoying than the last. A few of the tunes are butchered MIDI adaptations of riffs from Pink Floyd songs. I love Pink Floyd, but the mere connection between them and this dungpile website is enough to make me never want to hear one of their songs again. Just thinking about the opening of "Brain Damage" makes me want to smack myself in the eyes with golf shoes.

What the hell? That sort of sucks for the Coke-loving constituency. As far as the actual content of the site is concerned, I don't know what to tell you. I get that it's trying to say that we should all be good or we'll go to hell. That much is clear. I'm pretty sure that there's also stuff in there about how every bad thing that happens in the world is God saying "I told you so" to everyone who doesn't worship Jesus. Beyond that, it's a mystery. It's possible that it's trying to say that some ugly redneck is the reincarnation of Jesus because he has a $2.99 babeball cap that says "King of Kings" on it. It's also possible that the site is trying to say that he's the source of all evil. At the same time, there's this random foreign girl who could be the incarnation of God's anger - sort of an angel of death type of deal. Once again, though, she could just be an evil, sadistic bitch. Then there's Uncle Al. I... uh... I don't really know what to make of Uncle Al. I just have a strong feeling that he needs to be put in jail as soon as possible. He... he just makes me feel dirty for some reason.

Looking at it grammatically, the problem with this site is the overusage of pronouns. It throws out "you" and "I" every other word, but never gives a frame of reference for either of them. It's impossible to tell if the author is addressing a specific audience or just babbling. I'm not sure if the author thinks that he is actually the manifestation of God's voice, or if he just feels like he's qualified to talk about it. There is absolutely nothing on this site that even comes close to something that remotely resembles sense. One thing is certain, though - coke drinkers are screwed.