Wednesday, Feb 19, 2003 by Rich "Lowtax" Kyanka (@TwitterHasBannedAllMyAccountsEver)
Know of an awful site? Send it to us and become a hero!

MUADIN for President 2004, submitted by Nick. Muadin wants to be elected President in 2004. Wait, let me clarify this: Muadin REALLY wants to be elected President in 2004. Muadin is so determined to achieve this lofty goal that he is willing to spend at least 15 bazillion hours copying and pasting random text to his webpage, REFUSING TO RELEASE HIS "SHIFT" KEY, making god-awful Paintshop attempts, and quoting himself when referencing the "Terran Federation" and his revolutionary "Planetary Vision." Hey Muadin, I got a planetary vision for you AND IT INVOLVES YOU AND YOUR DAMNED CAPS LOCK COMPUTER BEING JETTISONED INTO THE SUN!!! 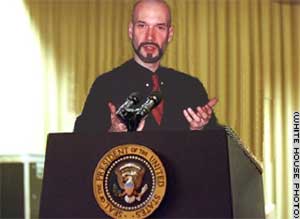 WE FACE A CHOICE BETWEEN ENLIGHTENED PLANETARY AWARENESS AND OBLIVION.

WORLD WAR III MUST BE ENDED AND EARTH MUST BE UNITED BEFORE OUR PEOPLE DESCEND INTO THE LONG FADING TWILIGHT OF PLANETARY CIVIL WAR.

THE UNITED STATES OF AMERICA CAN NOW USE ITS INFLUENCE, ITS WEALTH, ITS ECONOMIC, MILITARY, MEDIA, AND SOCIAL POWER, TO UNITE THE PLANET OR TO DIVIDE IT.

WE, THE AMERICAN PEOPLE, MUST NOW CHOOSE OUR OWN DESTINY AND IN SO DOING WE WILL CHOOSE THE DESTINY OF OUR NATION AND SHAPE THE FATE OF ALL OUR PLANET'S CHILDREN.

OUR NATION AND ALL OF THE UNITED NATIONS OF EARTH AWAIT AN AMERICAN PRESIDENT WHO DOES NOT LEAD BY FORCE, BUT WHO LEADS BY THE FORCE OF HIS EXAMPLE."

Don't blame me; I voted for Muadin! I've been looking at this website for the past hour and I still can't tell where Maudin stands on various important issues. However, he has made his stance regarding nuclear war and pollution rather clear (they're both "bad"). He doesn't specify exactly which planet he originally came from, but I honestly wish he would return there so I could instead waste my vote on a candidate more qualified, such as the empty can of compressed air lying on the floor next to me. Muadin doesn't say who his running mate will be, but after reading his website, I can only assume it's some giant roach with human arms or a doll possessed by the spirit of Fats Domino or something equally insane. I don't know, any guy who begins every speech with "My Brothers and Sisters, People of Earth" and Photoshops gigantic "M"s on circles can't be all that bad... can he? Save me from myself, Maudin!