For All The Syn

For All The Syn, submitted by Dot. Ahh smoking skull, how I know thee. One of the great animated GIF inventions of the late nineties, smoking skull has appeared on more Geocities web sites than there are people in China. Here we catch up with our old pal smoking skull GIF on the web site of the self-style "audio assassins" For All The Syn. This deathmetal crap spew quartet has been murdering various audio formats with their particular brand of shit for, at the very least, several days. They look like a bunch of carbon copy angsty teens and they sound like cannibal corpse as filtered through an 8th grade class for the profoundly retarded. 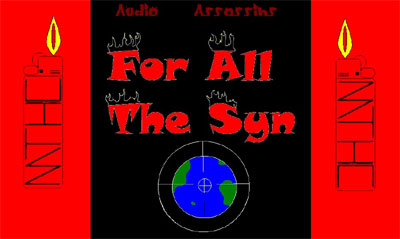 Now my influences, were first off, was Wes Borland, he was a major part of me playing the guitar, thanks Wes. He has his own unique style of playing, and a killer way at that!! I still to this day am influenced by his style of playing, now though, a major influence is 'System Of A Down', my favorite band. As you prolly read in Sludge's long ass bio he talked about concerts, well fuck it, i don't feel like going through em all, but i spose for your benefit i will name a few, some of the best concerts i whent to was, my first, the Day Off Fest in Portland Maine, with bands like MuDvAyNe and Disturbed, decent friggen concert, now my second favorite was a Kittie concert, also stared was Ochlocracy, which is an awesome fucking band, now my favorite concert was System of a Down, which put on an amazing show. My next show I would like to see would be Hatebreed, and i would recommend any hardcore music fan to go see them.

Now my opinions, were first off, was that this site sucked, although smoking skull GIF was a major part of me hating their site, thanks smoking skull GIF. It has his own unique style of being a smoking skull, and a killer way at that!! I still to this day am hating this site by his style of smoking and being a skull, now though, a major influence is 'Roach's Bio', my least favorite thing about the web site. As you prolly read in Sludge's long ass bio he talked about also being a stupid faggot, well fuck it, i don't feel like going through all of their bios, but i spose for your benefit i will name a few, some of the shittiest things i whent to was, my first, the opening page, with things like smoking skull GIF and pictures of the band, shitty friggen page, now my second most hated was any other page on the site, also stared with Roach, whish is a horrid fucking name, now my most hated person on the site was Roach, which put on a stupendous display of faggotry. My next web site I would like to visit would be anything but this one, and i would recommend any fans of not committing suicide to do the same.

Whatever you do, make sure you listen to some of their excellent songs! After you have really rocked out to this fine music, cruise on over to their Guestbook and let the know how much you enjoyed it.