Neck Brace Art Appreciation Klub, submitted by fuckingtest. Holy mackerel! It always boggles my feeble little mind when people dedicate the part of their brain responsible for perversion to something ridiculous instead of something practical. Normal people can settle for naked men or women and be happy, but no, there is always some daredevil who has to take it one step further and say, "Well, I like my naked women with tongue depressors jammed into their ears and scars in the shape of the island of Tonga. Otherwise I simply can't get off." I'm not sure how this happens, but I think it may have to do with the Cold War ending and people not living with the fear that nuclear weapons might destroy them at any given moment. At least with that cloud hanging over your head you felt life was short and too important to ruin by writing retarded fan fiction or organizing galleries overflowing with "sexy" images of women with bicycle pumps jammed down there throats. While this is no body inflation magnum opus, it does feature plenty of women in neck braces, because that's apparently the new version of sexy. At least for retarded weirdoes, anyway. 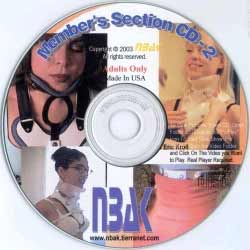 In the off chance my fan fiction wasn't terrible enough, here is a delicious taste of neck brace fetishist fan fiction:

As Beth sat down in front of her vanity, she had only her second look at herself in all her new hardware. The soft LSO now supporting her back she could live with since it was not very noticeable underneath her clothing. In fact it had sort of a retro vintage lingerie look to it, something you might see Madonna wear at one of her concerts. The SOMI Brace, however, was an entirely different story. It looked awful, Beth thought to herself --- it was very, very noticeable, especially the silver metal bars that supported the head and chin piece. And then there was that horrible looking chin piece, Beth thought, putting her hand to it, trying to pull it down ever so slightly to get a little relief from its continual upward pressure. The white vinyl covering and thick foam padding, molded precisely to her face, cupping her chin in a way which didn't allow rotation in either direction or movement up or down. The stark white color contrasted greatly with her flesh colored face. She attempted to wrap a scarf around it but took it off immediately, thinking that it would only appear as if she were trying to hide something from Jim, and there was no way she could hide her new SOMI brace.

And you people think I'm boring. This is why we should just start shooting anybody who dares to see a doctor or medical supplier or admits to not being 100% healthy. The risk is simply too high.