Thursday, Aug 07, 2003 by Rich "Lowtax" Kyanka (@TwitterHasBannedAllMyAccountsEver)
Know of an awful site? Send it to us and become a hero!

CubedCinder128's Video Game Giantess World, submitted by Alfombra Gigante. I used to think there was nothing more attractive than computer-generated images of a terribly disproportionate females. Needless to say, I was pretty ignorant to the ways of the Internet back then! Thanks to sites like "CubedCinder128's Video Game Giantess World," I now know that the future of eroticism lies in GIGANTIC computer-generated images of terribly disproportionate females! Oh, what a world! 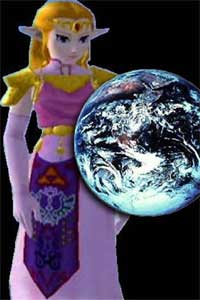 Sheik tries a jumping attack at Peach, but she grabs onto the Hylian and starts slapping her. Luckily, Sheik was able to break loose from Peach's grab, but even after that, Peach unleashed a flurry of slaps that left her at 27% damage. Sheik countered one of Peach's slaps to give her some damage points, while a super slap by Peach raised Sheik's damage even further. Peach jumped up, attempting to reach Samus's screw ball, but Sheik made a jumping kick that kicked Peach up to 26% damage. A counter attack later brought Sheik up to 72% damage. Sheik fired her shruiken-type weapons at Peach, but she shook them off and delivered another super slap to Sheik. At 96% damage, she was in the air, past the barrier of the right side of the ring. In mid-air, she transformed back into Zelda and used her teleport move, just barely making it back onto the edge of the arena. Peach, however, unleashed yet another series of slaps. Zelda was now at 111% damage. With the odds stacked against her, Zelda picked up a nearby Bob-omb and threw it at Peach. Peach couldn't dodge it in time and suffered major damage. She was now at 88% damage. Zelda tried a series of kicking moves, but Peach countered with a super slap. Peach jumped up to do a mid-air move, but this proved to be a big mistake as Zelda threw a fire attack at her. She became a flaming fireball as she flew out of the arena. Zelda won that round, but at what price?

YAY! Nintendo character semi-non-erotic fan fiction! Hooray! Keep in mind that they aren't really gigantic in the quoted passage above, but they consume two mega-mushrooms and become very gigantic later on in the story. The author also has a giantess Sailor Moon site, which he describes as "a place where the sailor scouts go when they've grown to giantess size," so if you were put off by the lack of shitty anime characters growing to ridiculous sizes, he's got that covered as well. Don't try to deny it; I know you were.