Watching The Thing taught me two very important life lessons. The first of these is that I want to spend as little time as possible in Antarctica. The other is that Norwegians cannot be trusted and should be burned wherever possible. One of our forum goons by the name of Tsaven Nava was unfortunate enough to find himself shipped out to the Antartic for work, presumably as some kind of cruel punishment. He somehow survived his harrowing ordeal of being paid to sit in a well-heated bunker with a constant supply of food and Nintendo Wii games, and invited other goons to ask him questions about his time stationed in the middle of nowhere. Here's how things turned out. 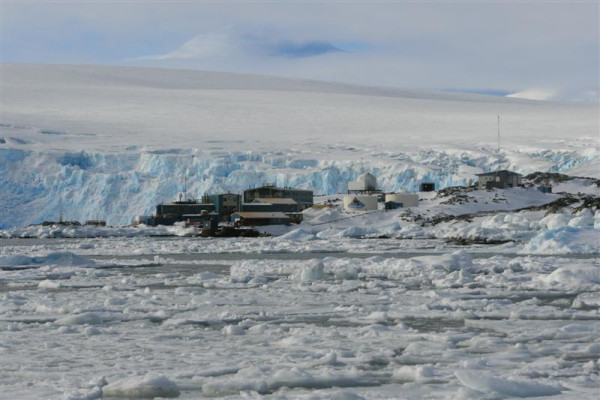 Ah, Antarctica. The seventh continent that many people end up forgetting about, because 99% of it is a frozen, barren, uninhabitable wasteland of ice and snow. Nothing lives there besides some penguins, and some fucked-up people who are unable to function in the real world. And for part of the year, I call it home.

I do contract work for the USAP, the United States Antarctic Program. The USAP operates three year-round bases in Antarctica; McMurdo, Palmer, and South Pole, and numerous temporary/semi-permanent camps during the summer months (October-February).

I spent the 2008 winter (April-October) working at Palmer Station, and will be heading to either McMurdo or the South Pole sometime in October-ish of 2009. Palmer Station is about 700 miles south of the South America.

Palmer is the smallest, and warmest of the three US stations. Maximum population capacity is just 44 people, whereas McMurdo (on the cost due south of New Zealand) can hold up to 1200 people, and South Pole can hold around 270.

The purpose of all human establishments in Antarctica is scientific research, although there is a little bit of political dick-waving involved. Palmer, where I worked, focuses mostly on marine biology research; It was built where it is specifically because it's in a relative hotbed of wildlife. Three types of penguins have their rookeries there, as well as many, many seals, whales, and flighted seabirds.

Q: What job do you do there and how did you get it? Do you have a bachelor's degree or anything beyond that?

A: Education? Are you kidding? I barely graduated high school.

My official title was "Carpenter's Assistant", but on a place as small as Palmer (44 people maximum, we had around 30 most of the winter), my actual roll was more of a "Station Bitch". The more horrible, unpleasant, smelly, cold, wet, and generally horrible a task was, the more likely I was to be the one doing it. I will say, though, that I might have had the best jobs on station, because I was doing different things every day. Sure, it wasn't a cushy job; I shovelled a lot of snow, and spent many hours crawling under the buildings whenever something broke, but at the end of the day, I think I got a much more authentic Antarctic experience then our network engineer might have.

Don't get me wrong, the job sucked. But it sucked in a way that is awesome.

A: Dorm-style, bunkbeds in a room roughly ten feet by seven feet, with communal bathrooms.

And yeah, most of the time people have room mates. Who gets the better rooms, and who has to have room mates is determined by "Ice-Time", the number of months a person has spent "on the ice". The people with more ice-time get the better rooms and are first in line to loose a room mate if the population drops low enough that people can get their own rooms.

Being that I was a fingie (FNG, Fucking New Guy), I had a room mate about half the time I was there, but when the station population dropped below 30-ish, I got my own room. We had a bunch of couples on station for the last winter, which helped with the housing situation, as they'd room together even if they both have tons of ice time.

Room-mate from hell does happen, but fortunately, not that frequently. And usually, while the suck at the time, the result in funny stories later once the situation is over.

We had this one guy on station for only a month (fire systems tech), who snored like holy shit, and our mechanic was unlucky enough to get him as a room mate. Our mechanic ended up setting up a tent out in the hills behind the station, and lived there for almost a month until he could have his own room again.

Q: You spent the winter there, meaning permanent darkness I assume? What was that like? Was the depression rate higher than usually?

A: Actually, Palmer Station is far enough north that we never got total darkness. At Mid-Winter's Day, June 20th I think, we had a couple hours of twilight. Technically, the sun did get a few degrees above the horizon, but it's behind the glacier, so the station says in shadow.

I think sunrise was at 11:30am and sunset at 1pm that day. But for about three weeks on either side of the solstice, we never got direct sunlight, as the sun wasn't high enough in the sky to peak over the glacier.

Depression isn't a problem, at least it wasn't when I was there, but we had a great crew. You're working enough that you don't have a whole lot of time to get lost in your own head, but the work pace during the winter is relaxed enough that if it's clear someone is getting burned out, they'll give 'em a day off or two just to go camping or whatever, to clear their head.

Craziness is more of a problem then depression. It's called "Getting toasty", or if you are crazy, you're "toast". It's sort of an extreme version of cabin fever, and eventually it strikes everyone in some form.