Buffo the World's Strongest Clown, submitted by BarryFandango. It's generally regarded as fact that clowns are not people. They are child-devouring monsters whose jolly demeanors and painted smiles are only facades behind which they hind their true malice and ill will toward all mankind. I'm not saying anything new, here. But on the list of dangers to humanity, clowns have usually been regarded as posing relatively little threat beyond the severe psychological scars they inflict upon children. That is, until now. Ladies and gentlemen, what I am about to share with you is not going to be easy to handle. Those of you with weak hearts may want to turn back now and go read my article again. That being said, for those of you brave enough to remain, allow me to introduce you to Buffo. 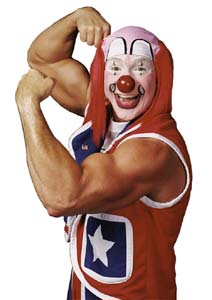 Buffo is not an ordinary clown. This gentle giant weighs in at over 200 pounds and has biceps that are bigger than most men's thighs. He juggles bowling balls as well as hatchets, meat cleavers, fire and chain saws - as long as they're not turned on! He rips telephone books in half and balances extension ladders and children sitting in chairs on his face. He lies on a bed of nails buried under a stack of cement blocks and walks on broken glass and machetes in his bare feet. He makes animals appear and disappear and escapes from chains, ropes, handcuffs and a strait jacket. He can unicycle, stilt walk, eat fire, ride a buffalo and has a little clown car as well as two big clown trucks, one even has it's own stage. He even has a little dog that does almost as many tricks as he does!

This ex-professional baseball player (Pittsburgh Pirates, Houston Astros and Chicago White Sox), ex-marathon runner and former school teacher for deaf and blind students turned power lifter, body builder and clown, adds a whole new dimension to clowning. His performances vary from county fairs and festivals to corporate events and company picnics. He also offers educational and entertaining school programs all of which can be done in sign language. For more than twenty years this multi-talented entertainer has performed thousands of times to thrilled audiences in this country and abroad, including appearances at the White House and Ringling Brothers Circus.

I believe I speak for everyone when I say holy fucking shit, Batman! If this guy was ever to turn against us, we'd be screwed faster than you can say "Sweet Jesus, Buffo, stop beating me with that child you're balancing on your face!" Buffo just loves to show off the buffoonery of having freakishly gigantic muscles. He's available for all sorts of occasions, from quick shows for the kids, to fun-filled evenings for the adults, which he promises will include "Fire eating, juggling and acts of strength with an optional surprise ending." I don't know what the surprise ending is, but of all the possibilities I can think of, Buffo ripping the head off of one of the audience members is the least disturbing.

If you scroll down a ways on the Who's Buffo page, you'll find Buffo's detailed chart comparing an Ordinary Guy, and Ordinary Clown, and Buffo, the World's Strongest Clown. Now, far be it from me to argue with a man who could break my spine like a chicken lobster, but this chart, while very informative about Buffo, is pretty damn cocky. I'm not going to argue with Buffo when he says that he, and he alone can balance a child in a chair on his goddamn face. I know a lot of ordinary guys and none of them can do that. I've never seen another clown do it, either. But the bit about three appearances at the White House? Come on, Buffo. A lot of clowns have been to the White House. A lot of ordinary guys have been to the White House. Let's not get presumptuous. And unicylcing? Okay, most ordinary guys can't do that, but frankly I'd be a little disappointed in an ordinary clown if he couldn't handle himself on a one-wheeled demon for a few minutes at least. And plenty of other clowns drive little fucking clown cars. I don't know where you get the nerve to say they don't. If you were the only clown who drove a little clown car, then the phrase "clown car" wouldn't be part of the lexicon, now would it? Answer me that, Buffo! And then there's his last point: that of the three people on his chart, only he is a "FULL time entertainer." Bullshit, Buffo. I'm willing to bet there are a lot of ordinary clowns out there who would be pretty pissed at you if they heard you say that. Luckily, you could beat them all to death with your little clown car.