I'm going to make a confession here and maybe I'll get shit for it and maybe I won't (and either way, 0 fucks will be given by basically everyone reading this): I don't "get" Sonic the Hedgehog.

Don't get me wrong: I had a Sega Genesis and several Sonic games as a fat, gay child and, despite being more of a Nintendo fan, I thought they were good games. What I don't get is why the Sonic universe attracts such weird, creepy autistic weirdos. I mean, you don't see Mario fans making TRUE and HONEST, ORIGINAL CHARACTERS (DO NOT STEAL) called Mariochu or the dorkwads in this video running around with crude 3dMaker versions of Luigi. 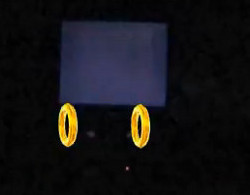 You won't die in 2 weeks after seeing this "ring", but you'll wish you had.So, what is it that makes Sonic the Hedgehog so uniquely attractive to sperglords? As far as I'm aware, the Sonic universe is populated by a bunch of boring-ass interchangeable recolors that all have generic, "sassy, 90's attitude" personalities, so surely it isn't the, ahem, "characterization". There have been a several good Sonic games, but a whole lot of stupid bullshit that even the sorts of fans that make videos like this try to disown, so surely it's not the games, so WHAT IS IT?! I seriously, hand to Jeebus, don't understand the appeal. What did weird aspies do before Sonic? Did they sperg out about stamp collecting or something? SERIOUSLY.

Woops! I forgot to review the actual video! I guess I'll make this longer and "effort-y" since I totally scammed you guys out of MOAR AWFULVISION last week by only doing 5 pages worth. OKAY FINE. Ahem: 2 sperglords, the sort of people I spent 3 paragraphs being baffled by, are contacted by Sonic through their TV who sends them two rings that cause them to wear gloves and vaguely-color scheme coordinated clothes. The two set off to rescue Regular Sonic and "NOT A RACIST, BUT..." Sonic from Robotnik/Eggman/who-cares-I-refuse-to-learn-things-about-a-series-where-Steve-Urkel-voiced-the-protagonist. 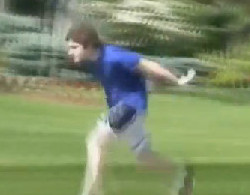 DANGIT PEGGY THAT BOY AINT RIGHT AHTELLYAWHUTThe two implausibly beat up several horribly animated CGI robot things that are just standing around doing nothing. They then happen on Regular Sonic and "SOME OF MY BEST FRIENDS ARE BLACK PEOPLE" Sonic, as they hang, crucified, on a brick wall; held in place by lightsaber_effect.8bf. The two brave spergwarriors free the crudely animated hedgehogs by using some of the worst special effects this side of an Ed Wood movie.

Thing 1 rips his glowing, purple ball sack off and tosses it to "WHY ISN'T THERE A WHITE ENTERTAINMENT TELEVISION???" Sonic by way of Thing 2's hand which we are supposed to believe is actually "HERITAGE, NOT HATE" Sonic's hand. The quartet teleports off by way of Scrotomancy, hopefully into the maw of an active volcano. 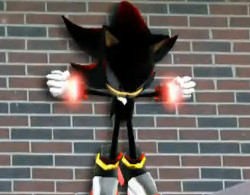 Conclusive proof that Jesus was a black man.Unfortunately, they reappear in front of a lake which is doubling as a nuclear test range. Wait, did I say "unfortunately"? That is actually a great place for them to teleport because FUCK THEM AND FUCK THIS MOVIE. Anyway, they deduce that Eggman is behind things and run off to confront him. I will point out here that Regular Sonic and "LIBERALS ARE THE REAL RACISTS" Sonic have roughly 5 frames of animation each and that they run across the lake and let you insert your own punchline here.

They find Eggman who is - SURPRISE! - a poorly made CGI rendering. After some more award winning dialogue that would cause even George Lucas to say "golly, you guys, maybe we should rewrite that!", the ONLY GOOD PART OF THIS ENTIRE VIDEO happens: Sonic gets blasted by Eggman. Unfortunately for us, his stupid, poorly rendered, sassy, chili dog eating, hedgehog guts aren't strewn all over the countryside; rather, he just kind of two-frames-of-animations (yes, I'm using that as a verb and a fitting one, at that) into the background and stands there like a dumb, blue pile of Smurf shit. 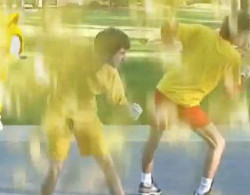 EGGMAN I'M COMIN FOR YA AT WRESTLEMANIAKnowing they couldn't possibly beat a crude 3dStudio Max model on their own (because they totally didn't do that very fucking thing several minutes earlier), the four decide to do some stupid weeaboo shit that results in them turning into Super Saiyans or Hulk Hogan or something. They then run wild all over Eggman, brother, which consists of shooting him with glowing urine lasers which causes Eggman to explode by taking advantage of his secret spergpiss weakness.

The four celebrate like only they know how: waiting for Regular Sonic and "REVERSE RACISM IS A REAL THING BUT WHITE PRIVILEGE ISN'T" Sonic's horrible animations to rotate the right way and then running at the camera and pausing all dramatically while the credits roll (er, more aptly, CREDIT: a birthday greeting for a fictional character); basically the ending to every 80's movie ever only with less Tears for Fears and Molly Ringwald and more autism spectrum disorder and crudely animated hedgehogs.

The end and fuck you.

"at least its not autism that shit kills."

"you guys are fucking retarded asspies"

"Way to ensure you never feel the touch of a woman."