Thursday, Sep 18, 2003 by Rich "Lowtax" Kyanka (@TwitterHasBannedAllMyAccountsEver)
Know of an awful site? Send it to us and become a hero!

The Wild Devine Project, submitted by SamPenguin. I've been yearning for the day when I could buy a video game which healed my soul while I stared at hot air balloons and pressed the arrow keys. Oh how I've waited for such a time! It appears that my dreams are very close to being answered, as "The Wild Devine Project" is fixin' to release "The Journey," some interactive CD-ROM game which not only features bright and pretty colors, but additionally costs $129.99. Over one hundred bucks to see highly generic rendered 3D landscapes? You've sold me! 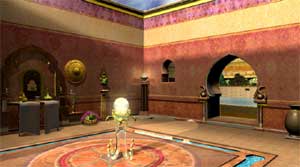 Movement through The Journey is dependent upon a person’s regulating their energy or physiological reactions up and down much more than the few games with biofeedback technology on the market that Whitehouse has seen. “Most of these other games simply tell people whether their GSR or pulse rate, is moving up or down, and they have to figure out what’s happening to them when this occurs,” he said. “Basically, these games require players to maintain just one thing—a very stable GSR or heart rate. At best, they can create some subtle changes to influence the outcome of the game.

“In The Journey, players are on an evolutionary journey of self-exploration and discovery. Here, they not only see what’s happening on the computer screen, but learn that, unlike most types of computer games, the harder they try, the worse they do.”

Huh? What? So I'm supposed to fork over $130 and try to not play the game as hard as I can't? What? Is this game supposed to encourage laziness or something? If so, I've already won and am eagerly awaiting the sequel, "The Journey 2k4," in which you're required to travel through a metallic base full of green lighting and toxic waste barrels that inexplicably explode when shot. What a bunch of new age cheese.