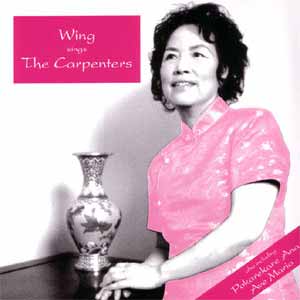 Wing was born in Hong Kong and immigrated to New Zealand 10 years ago where she began to study singing. She has been singing for patients in hospitals, resthomes and R.S.A's for about four years and occasionally holds her own promotional concerts in Auckland at the First Imperial, Centra and Hyatt hotels. English is Wings second language and although her pronunciation may not always be perfect, but she hopes that you will still enjoy the music.

It's true, her pronunciation is occasionally shaky. You know, sort of like how ebola is occasionally lethal. It amazes me that people in New Zealand would actually let this woman butcher classic English songs in front of hospital patients. I guess it's a way of making their day to day pain seem less unbearable. "Sure, you've got colon cancer, but at least Wing only comes around once a week! The other six days are smoooooth sailing!" I'm sure there are statistics out there that prove that more life support systems are "accidentally" unplugged while Wing is singing than the rest of the year combined. If you think I'm joking about just how hilariously badly this woman mangles her repertoire of stage standards, just listen to a song or two. Personally, I'm a fan of "My Favourite Things," especially when Wing shares her thoughts on "Blough paypeh backehjehs tie hop wih stwins." I don't know exactly what that means, but it definitely makes being conquered by the Nazis seem like a decent option.