Tuesday, Oct 28, 2003 by Rich "Lowtax" Kyanka (@TwitterHasBannedAllMyAccountsEver)
Know of an awful site? Send it to us and become a hero!

Mailbox for MICHAEL JACKSON, submitted by Mr. Black Knee-Gor. First off, let me get a minor point out of the way: I don't understand why Michael Jackson is still popular. Sure the guy was a hit pop sensation back in the 1980s, but that was when he was still a black heterosexual man who had most of his original body parts. He started self-destructing at the end of the 1980s and eventually turned into the toothpick-thin, quasi sexual, creepy owl-like humanoid cyborg beast he is today. I've seen Chicken McNuggets that are more natural than Jackson. Regardless, there are still some people throughout the world who haven't been informed how creepy, disgusting, poor, and talentless Michael Jackson has become in the past two decades or so. Most of these individuals live in countries which list "boulders" as their most popular national export and switch governments faster than I can change my underwear. This would explain why such folks are writing Jackson such letters: 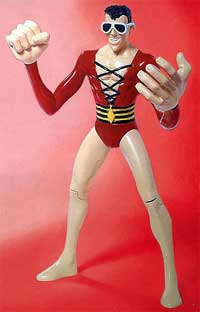 I didn't dare perform an image search for "Michael Jackson," as I feared I might actually have to look at one, so I chose this image to represent him. You'll find it disturbingly accurate.

Date: 10/22/03
Subject: NEED LOAN
HELLO MICK WE THE WOD UP MINISTRIES IN BENTON HARBOR,MI IS A YOUNG CHURCH THAT IS ON THE MOVE.WE ARE YOUNG PEOPLE WHO HAD NO DIRECTION IN LIFE. WE THROUGH THE HELP OF GOD AND SOME EDUCATIONS PROGRAM HAVE GUIDE THEM IN THE RIGHT PATH. WE NOW RENT A NICE CHURCH WITH LOST OF LAND SO WE CAN BULD A GYM FOR YOUTH TO COME AND PLAY. THE OWNER WANTS $178.000 SO IF YOU CAN HELP PLEASE EMAIL ME. PASTOR O.C. ISOM JR

Date: 09/06/03
Subject: Very Urgent
Dear friend, I am one of your bigger admirers named Hicham ADDOUH, I am Moroccan, I am 35 years old, I got married and father of two girls, Sarah 10 years and Imane 8 years. With my wife Laïla and my best friend Brahim MEHDAOUI, him as married and father of a boy, we have a very big passion for animals and especially for dogs and cats, and since still we dreamed to create a modern shelter for dogs and cats quit either manhandled and an unit of breeding of dogs and cats and that will be a first in Morocco; the Moroccans in general begin to interest themselves seriously to animals of company and especially to dogs and cats but they hurt in themselves as to procure and our goal is to help them to have their better mate to a very interesting price. Incomes of these sales will be in large part intended to the upkeep of the shelter and its boarders that will be placed in families of welcome. For the realization of this project, we need a 2 hectares land, a local technique construction, an acquirement of the necessary material and the purchase of the livestock. We believe a lot in this project but unfortunately we don't have means sufficient financiers for its realization; we thought then and hesitated for a long time before taking the decision to ask for help to people as you that we add sure are the in love with animals and get worried about their fate and that would not hesitate one second to make their possible to help us in our action of animal protection. We appraised with the help of architects and voluntary professionals the cost of the project to about 300 000 US Dollars, what represents for us an important sum. We are very confident and we believe to the miracle a lot because we know that the similar projects to the our have been achieved in other countries of the world due to the help of people as you that contributed to their realization. The sum of which we have need can appear derisory for people that win millions of Dollars but for animals of which we take care of the fate that is indeed a question of survival. I wish personally thank you for advance for your help and I remain to your whole disposition for all supplementary information, I also ask you to accept the expression of my sincere greetings. You will find all my coordinates enclosed.
Hicham ADDOUH Hicham ADDOUH Adress : 223, boulevard Ghandi, Residence Zahra ,appt 2 Casablanca 20200 Morocco Phone number: 00 (212) (0)65 25 27 86 00 (212) (0)60 46 54 24 E-mail: hichaom

Date: 10/27/03
Subject: Why won't you write back?
i have sent u severel emails and u have not ritten me back yet. Y?? i need 2 talk to u about somthing very importent! i love you micheal!!

Hey, I think I might have some semblance of an idea explaining why Michael Jackson doesn't write back to you: BECAUSE YOU'RE FUCKING NUTS! Who posts messages like these and seriously expects Michael Jackson to read them and suddenly exclaim, "boy howdy, I surely would like to give Hicham ADDOUH $300,000 so he or she can build a goddamn petting zoo in Morocco!" Michael Jackson probably doesn't even say shit like "boy howdy," he just produces a sound resembling the sigh of a Southern belle while patting his forehead with a white laced handkerchief. Even if, for some inexplicable reason, Michael Jackson used 130% of his brainpower to get online and find this site, he wouldn't give any of these hambags a bloody dime because ol' Jacko can't even afford the postage to mail somebody a 37-cent check. Oh well, far be it from me to crush the hopes and dreams of retards across the world; let us all hope and pray that these brave individuals posting here may some day have their messages find their way into the heart and plastic groin of Mr. / Miss / Other Jackson.