Heroic Homosex, submitted by sumocide. Considering the amount of angry e-mail I get whenever I use the term "fag" or "gay" purjoratively I was a little reluctant to make fun of a site called "Heroic Homosex". Until I visited the site, then all hesitation evaporated like sweat from a well-muscled martian's glistening foreskin. Now before we get any further this site contains a good deal of gay pornography, so if that's going to get you into trouble with the missus then you'd better sit this one out.

This is a site for guys into

And who are proud of what they like to do.

This is a good place for you to be.

If I might offer a suggestion from a position of relative ignorance, wouldn't it be possible to combine the category "COCK TO COCK" with the category "DICK2DICK" and also merge "COCK COMBAT" with "DICKFITES"? I'm not sure, sounds feasible. 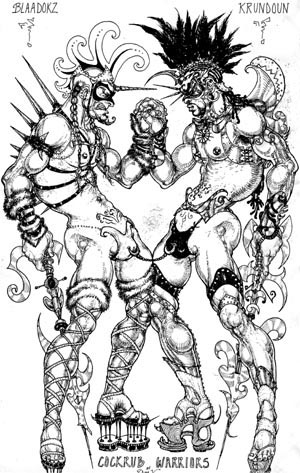 The origins of the COCKRUB WARRIORS are shrouded in the dark mists of the very late 20th century. Although cyber historians and archaeologists have labored hard to uncover the truth, most now admit that we will probably never know the full story. It is believed that the original COCKRUB WARRIORS band consisted of 5 "dudes" as they were called: Joey, Jamie, Josh, Jake, and the somewhat quarrelsome Jason. And, the names Jeff, Justin, RJ, and Jeremy sometimes appear in databases as well, along with Mike and Don.

Oh that quarrelsome Jason! I can't stand him!