Men In Panties, submitted by the_name. Finally, a website for all you guys who enjoy wearing female underwear! Er, the underwear isn't female, it's for females. Sorry if that sentence structure caused any confusion. This site has many great features for all you panty-wearing pansies, ranging from a $20 Victoria's Secret coupon giveaway for the best man-in-panties photograph to an image gallery featuring plenty of grown adult males showing off their bulges behind grown adult female underwear. Wait, the underwear isn't grown and female. Shit, am I making any sense at all? If not, I blame it on having to look at men wearing panties. 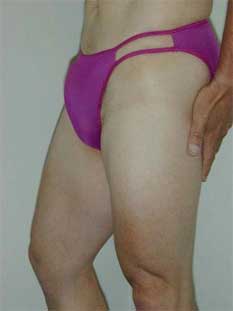 Well, after realizing how much I liked women's underwear, I spent a lot of time acquiring a poorly fitting collection from female friends and relatives. After I got married, you'd think things would get easier, having access to my wife's underwear drawer (hidden from her, of course). But it didn't, and I also discovered that it really was women's underwear in general I liked, not just pre-worn panties and bras. I decided I finally wanted my own collection, of stuff I liked that fit!

Well, I was on a home vacation and my wife was at work when I took my first foray into buying lingerie. I looked up some sizing info on the internet to figure out conversions, did the math, and went to my first store. It was actually Kmart. It was fairly early on a weekday, so there weren't a lot of people around, which was good, as I was feeling really inhibited by this new venture. I had on a pair of dark green tap panties with a little flower bow in the top middle, formerly owned by my niece. I rubbed them against myself in the car briefly to stoke the fire and marched into the store. The ladie's lingerie section was in the back, right next to the men's jean section, as luck would have it. I was, of course, excited and aroused and afraid.