Star Wrecked, submitted by Look Polish. Fans of Star Trek will buzz with delight at this humor website tailored to their interests. Be sure to read the quote beneath the image in the voice of the fat comic store owner from the Simpsons. 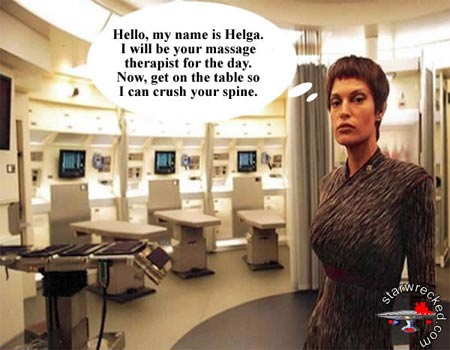 In this funny Star Trek Enterprise series joke and T'Pol comedy picture, we explore her even more aggressive side. It's one of the first seasons TV show parodies. Here, T'Pol must learn to be less emotional when giving massages. She's put three cadets in the sick bay, and Tucker's in traction.

Much to my horror, this was actually one of the funniest jokes on the site and it's not even technically a joke. Most of them are whatever you would call the opposite of a joke. A droke, maybe. That is to say these are about as funny as getting a cancer diagnosis while you're drowning in a vat of boiling AIDS blood.