I can almost hear the movie pitch session for this new and totally underground Xtreme Sport. You get Ben Stiller, maybe Owen Wilson, have them as rival Super Handz champions. Owen Wilson is the earnest and down-on-his-luck 2004 Super Handz champion, master of pen-spinning and various easy-going hand shapes like teddy bears and roses. Then Stiller comes along with his flashy gloves, techno music and various Xtreme hand shapes like scorpions and bald eagles. Stiller is a sore winner and he rubs Wilson's nose in defeat. Years later, Wilson is called back by destiny, and probably a charity that needs money exactly equal to the Super Handz prize, to compete the Super Handz league for one last battle.

Yes, this is a very thorough website for Xtreme Handz, including goofy videos of various experts bending their hands into goofy shapes. You can almost picture those nimble fingers wrapped around a Mountain Dew Code Red. 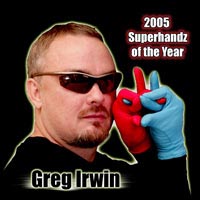 Superhandz of the Year 2005 First of all, congratulations to Greg Irwin for being the 2005 Superhandz of the Year. Greg earned this honor for his unbelievable hand skills and dedication to the art. If you haven't seen them yet, check out the Xtreme Digits videos in our Videos page.

This is the sort of thing that should have a one-off video on YouTube that people pass around and say "whoa, cool, check out this guy." The fact that there are apparently competitive leagues and a whole subculture for what amounts to doing things with your hands that you would normally do while bored in the office is baffling.