Saturday, Sep 23, 2006 by Corin Tucker's Stalker (@DennisFarrell)
Know of an awful site? Send it to us and become a hero!

Katia Doll is (I'm assuming) a man who dons a full body suit to look like a horribly disfigured and emotionless woman. 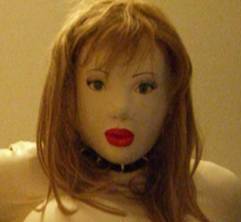 Looks familiar, right? We ran an awful link featuring a guy that did the same thing a while back. The fact that there are more people out there doing this is creepy in itself, but things get much worse. 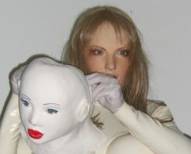 Once "Katia" is all suited up, he/she likes to put on a second full body suit on top of the original one like some sort of Russian doll that escaped from a mad pornographer's lab. The second suit is meant to resemble a rubber sex doll, but it's basically an albino version of the first suit with hilariously large breasts and firetruck red nipples that were obviously drawn on with a marker by a shaky, sweaty hand.

The commentary is pretty great too.

I have an incredible nutsy idea! I want to become an inflatable sex doll. Yes... one of that doll that people use as sexual object

Let's go down in the basement to see if I got all what I need for my transformation.

(image of a dark and scary set of stairs)

What is this? Wow! A female rubber mask! Someone should left it here after a Haloween party!

My parents and my sister and going away for the weekend. I have two days to develop my project!

Parents, talk to your kids more often. If not for them then for the good of our blessed internet.