Incredibly, there's a lot of quality stuff out there this week! Magic Mike has Sean "Keanu Grieves" Hanson taking his clothes off in appreciation; Ted gives Joseph "Jay Dub" Wade something to cuddle up with; Killer Joe makes Ian "Professor Clumsy" Maddison seek out lighter fare; and Lay the Favorite makes him wish he hadn't bothered.

REALITY: Exiting the theater, I couldn't help but wonder why, exactly, I enjoyed Magic Mike more than my girlfriend. Was I - am I - gay? As any mostly straight male would when questioning his sexuality, I bee-lined to the men's room and stroked off a couple dudes before I realized two things: 1) cock isn't my thing, and 2) Magic Mike is the victim of studio marketing execs who still don't know how to sell a good movie that defies categorization.

There's a vast gulf between what we're told Magic Mike is about and what it's actually about. According to IMDb, in Magic Mike, "A male stripper teaches a younger performer how to party, pick up women, and make easy money." Well, yes, but that's like describing Requiem for a Dream as a movie about a free spirit finding her way to a lesbian orgy or Pulp Fiction as a film in which Samuel L. Jackson gets his wallet back. This kind of disingenuous marketing probably explains why I was one of only a handful of males in a packed theater from which the girls'-night-out crowd emerged speechless and bewildered in their strappy shoes.

Like The Girlfriend Experience, Magic Mike uses the sex industry as a springboard rather than a tentpole. While Magic Mike is certainly less somber than The Girlfriend Experience, Mike wrestles with class warfare in the fallout of the recession, working multiple jobs to stay afloat and struggling to get a loan on a cash down payment. He also wrestles with questions many Americans ask: To what extent can you separate yourself from your job, and how long should one stay in a doomed career? 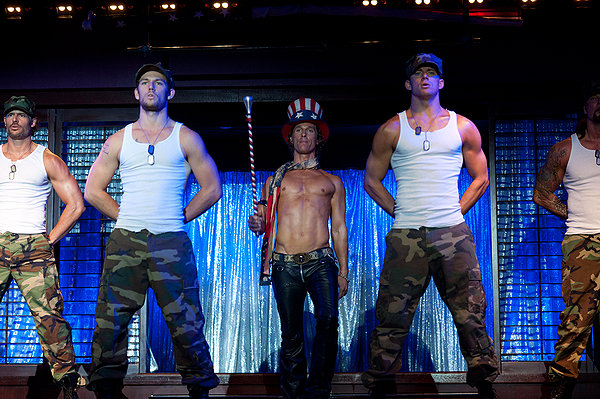 Look out! It's Killer Joe!

I wonder how the target demographic or the public's expectations would shift if we knew in advance the "younger peformer," Adam (Alex Pettyfer), is an opportunistic asshole who spurs the "male stripper," Mike (Channing Tatum), into reevaluating his career choice after Adam makes a series of increasingly bad decisions on Mike's watch. The American The Full Monty? More like Boogie Nights-lite if Dirk Diggler thought with something other than his diggler.

"Boogie Nights-lite" might read like an insult, but here it's appropriate and more of a commendation. If Magic Mike had retained The Girlfriend Experience's sobriety, it would have fallen into an age-old Hollywood trap: Once in a blue moon, a major motion picture will confront hedonism head-on and revel in the party for a while before punishing characters by subjecting them to extreme degradation. The rape scene from Showgirls and any number of erotic thrillers in which sex and the fear of violence are indistinguishable by the credits come to mind. Sure, the characters in Magic Mike go through some heavy shit in the final act, but the conflicts are plausible and the consequences exist only to spur our protagonist into reassessing his life, not to punish him for his initial choice to begin stripping or his reasons for doing so: the pursuit of sex and money. 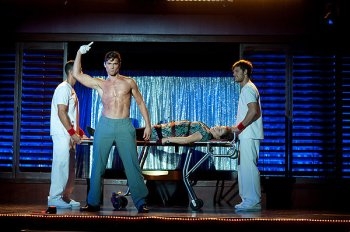 Are you going to saw her in half?Despite my utter indifference towards Tatum's continued existence, he's the perfect choice for Mike. His trapezoidal Cro-Magnon head and bland form of handsomeness - his continuing blankness - allow us to identify with Mike as he becomes the everyman, speaking Bro-nese as he struggles against the limits of his class, the quiet knowledge that physical prowess and charm are his only strengths, and mounting loneliness. In another life (and another state), he'd be scouring the Jersey Shore for fake-tanned pootie, but Mike is an essentially nice guy to whom the cracks in his dreams are beginning to show.

This is especially poignant in a sequence set on a Florida beach, in which Mike realizes he's not boyfriend material and he's caught between two women (Olivia Munn and Cindy Horn) who are a) too smart for him and b) romantically, if not sexually, unavailable to a schmuck like Mike. The colors are desaturated to achieve the quality of an old photograph of a party Mike can never revisit as time marches on, taking him with it so he can grow older and a little bit lonelier by the day.

And you're thinking: "But, Internet critic whose name I don't remember because I'm 800 words into a review of what was supposed to be a movie about swinging dicks, how's the man-ass and cock?" The man-ass is good, there's a distinct lack of cock for a movie about male strippers, and Munn gets naked rather unexpectedly, if you're willing to buy a ticket for tits alone. But the real reasons filmgoers should see Magic Mike are absent from the trailer: natural acting, convincing verisimilitude, dialogue that's at once realistic and angular, a group of characters you don't often see in Hollywood movies, humor that springs more from the characters than the situations, an unusually healthy-ish attitude towards sex, a Lynchian drug trip that ends in vomiting, and uniformly gorgeous cinematography that makes a cramped, shabby strip club look almost palatial thanks to effective use of a wide-angle lens.

And then there's McConaughey's character, the club owner who oozes sleaze but has a far more realistic perception of his place in the world than Mike would ever expect. Speaking of which, would you ever guess that, in a film like Magic Mike, McConaughey would tell a character to "relax, I'm not a fucking faggot," rather offhandedly? Step Up with dicks, this is not, and Magic Mike is the second Channing Tatum film of 2012 (after 21 Jump Street) to work so hard at defying its own marketing.

I guess I am gay, after all - gay for Magic Mike.

*There's only one, and thank God for that, because it's surely the lowest form of humor.

**Untoward frat boys get their asses handed to them by mostly naked male strippers. Hilarious!

MINORITY REPORT: There's an unwritten rule of dating that says not to take a girl to a concert on the first date because you will never look as cool as the band does. By that same logic, there should now be a rule that declares "Never take your girlfriend to see Magic Mike. Ever." - Martin R. "Vargo" Schneider