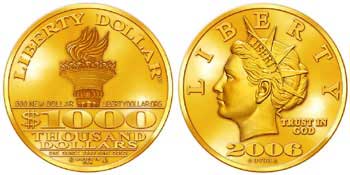 The Liberty Dollar, submitted by Gao. Friends, I am fed up with the monetary system we have in the United States. It's failing, faltering, and in danger of becoming obsolete. Everywhere I go people refuse to take Federal Reserve Notes because it's more profitable to burn $100 bills than to use them as legal tender.

The buck stops here. I just got in the mail my American Liberty Dollars and I have to say, the peace of mind of having your money backed by a guy in Hawaii, which isn't even really a part of the United States if you ask me, is liberating. Don't take my word for it. Here are some honest to god success stories!

I'm experiencing incredible success spending with Liberty Dollars. In the past two weeks, I've made the following purchases with $10 or $20 dollar Silver Liberty, all at face value (I've NEVER been offered LESS than face value for a LD in my life):

1. 5 taxicab rides in Manhattan, received change
6. Bought a bagel and cream cheese for $1.50 with a $10 Liberty across from Grand Central Station at a Korean grocery, received $8.50 change. The Korean guy was laughing in joy the whole time holding the coin.
7. Spent 3 $20 Liberty pieces over the past 2 months at a local Ukrainian diner.

I use Liberty Dollars to pay for all of my purchases from foreigners who don't know what the fuck! The joy I feel when I swindle some Korean guy out of a bagel is priceless. It saved my marriage!

Don't delay, become a Liberty Associate today and get a $100 bonus for everyone you sponsor. It's the kind of value you could never get with those crusty old Federal Reserve Notes that are crawling with feces. Liberty notes feature fecal fighting enzymes that emit a pleasent purfume for sparkling clean money you would never be ashamed to wipe your ass with.