Thursday, Dec 07, 2000 by Rich "Lowtax" Kyanka (@TwitterHasBannedAllMyAccountsEver)
So you're interested in adopting a friendly new living companion, one that won't scorn and deride you like all the girls used to do in high school? A pet is the perfect choice for you, my friend, as many animals lack the ability to say "for the love of God, please stop!" or even call 911! In this guide, we will cover a wide range of potential pets, all ready and willing to become your friend to the end... whether that end be directly caused by them or not. 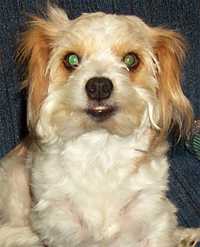 People who own dogs include:

Reasons to own a dog:

Dogs are faithful companions that will provide hours of entertainment and loyalty for both you, your children, and then man who's breaking into your home. In other words, they're very stupid.

Now before my inbox is flooded with email from people informing me that their dogs are furry reincarnations of Albert Edison, let me pose the following crucial question: who the hell is Albert Edison? I'm fairly sure I meant to write "Albert Einstein" because I don't know anybody named "Albert Edison", either alive or dead. However, this does bring up the question of whether or not I know exactly what I'm talking about, and let me assure you that I do.

My family has always been a strict "pro-dog" family. I have been surrounded by various canine and canine-like entities my entire life, and there has never been a period of time when my family did not own at least one dog. Even when I was a zygote in my mother's womb and she had Dalmatian sperm surgically injected into her, I've been around dogs. I can safely say that dogs are some of the most stupid animals on the face of the Earth. For example, when I was five years old (or maybe 23, I have a tendency to confuse minor details), I was teaching our Golden Retriever "Belle" to sit. The process of having a new pet learn a trick can often be a long and grueling procedure, but I was crafty enough to have a special trick up my sleeve: a gigantic plastic baseball bat.

I would calmly stand near my swingset, staring at the dog (who was trying to follow all the free-floating microscopic particles only dogs seem to be able to view), and chant, "Belle, SIT." Of course the dog wouldn't sit, because the word "sit" carried about as much meaning to Belle as me suddenly shrieking "I am covered with invisible, radar-avoiding lobsters!" This is where my cunning plan came into play; after I said "sit", and the dog failed to sit, I would engage in the world famous sport of what I call "clubbing the dog in the face with a plastic baseball bat." Yup, I smacked the poor girl right between the eyes, and she wouldn't even flinch (hey, I was five years old, I didn't know better). After 10 minutes of this strict, hardcore training exercise, the dog would still be there, standing in the same exact location, continuing to count every single oxygen atom within a nine-mile radius. Many dog owners dub this as "loyalty", as any less loyal animal would've undoubtedly been parading around the neighborhood with my small intestines trailing from their mouth at that point. The line between "loyalty" and "hardcore stupidity" is very vague at best.

Many people claim that dogs can provide excellent protection from burglars, rapists, and party clowns, but this isn't usually true. Unless you purchase one of those genetically-engineered Pit Bulls that can crush a human skull in their jaw and digest it with their gallons of acidic bile, your canine is probably going to be a pushover for any creep who wants to swipe a few of your precious Star Trek collector plates. I'm sure Fido looks all mean and tough while barking at grandma and causing her to spontaneously urinate in fear all over the brownies she just dropped to the floor, but as the old saying goes, dogs sense fear. They can also sense discontent, hunger, pity, discomfort, irritation, joy, voter apathy, and cold fronts. Unfortunately, they cannot sense pure evil. When the murderer who just escaped from the federal penitentiary comes crawling through your window with an empty bag labeled "HUMAN EYES" and a rusty spoon, do you know what your vicious attack dog will be doing? He'll be crouched behind the convict, inspecting the guy's shoe for any trace remains of the poodle shit he stepped in seven months ago. If you're hoping your dog will protect you from all forms of evil, you'd be better off purchasing a handgun, which you can easily use to put yourself out of your misery when the eyeball-scooping psychopath goes after your second eye.