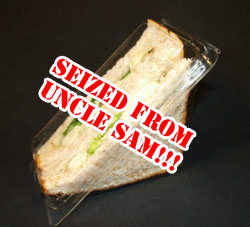 Hey, honest taxpayers: the government "takes a bite" of your paycheck... time to take a bite back! The Shaggy Butte branch office of the IRS has been shuttered due to massive not being necessary, and WE have their sandwiches-- Uncle Sam's loss is your gain! SBSS got first crack at their well-stocked TAXMAN VENDING MACHINES, and we have over 100 sandwiches to liquidate at rock-bottom prices. Sandwiches served in triangular plastic casing. Varieties include PB&J, Egg Salad, Unknown, Ham, Turkey, Miscellaneous, Cheese, Green/Brown and a special MYSTERY BAG!

It's a RACE WITH FREEDOM at SBSS!


The CLOWNS in our state legislature are hard at work TAKING AWAY OUR FREEDOM! Soon, several varieties of exotic bushmeat and nonstandard game will be declared UNFIT FOR HUMAN CONSUMPTION-- but for a limited time only, you can experience their deliciousness for pennies on the dollar! Major bushmeat suppliers are liquidating their stock of succulent ape/monkey flesh and mouth-watering African squirrel and porcupine. This could be your LAST CHANCE at a Hot Footlong Bonobo Hoagie! Also on the chopping block of liberty: our state is finally catching up with national standards on horsemeat laws, so don't miss out on our famous Preakness Cheese-Stakes-- a Triple Crown of thin-sliced horse, sauteed onions and provelone! 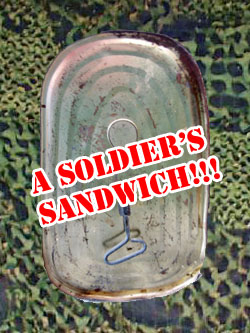 Over thirty thousand American boys lost their lives in the Forgotten War. Now, more than half a century later, we remember the brave soldiers who laid it all on the line for a free Korea. These PATRIOTIC EGG SANDWICHES come preserved in their original tins, and they're bursting with the flavor of AMERICAN SACRIFICE! Bonus: buy 5 PATRIOT EGG SALADS and we'll throw in a free ENEMY SANDWICH, captured from Taliban forces in Afghanistan. They're not really sandwiches, but they're made of grape leaves and ground up goat and they're explosively delicious-- we call them improvised FLAVOR devices! 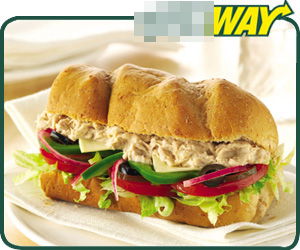 Local ***WAY SANDWICH franchise-- we can't print the name, but you know this place never has "sub" standard meals!-- has become an unofficial Shaggy Butte Sandwich Surplus partner! The fine folks at ***way have their sandwich artists working midnight to 5AM to produce HIGH-QUALITY daytime sandwiches at LOW-COST after-hours prices! Meatball subs, toasted flatbread Italian subs, we've got the whole ***WAY package. Stop by and pick up a readymade sub, or place your special order and the folks at ***WAY will produce it the next night. DO NOT blow the whistle on this great deal!

FRESH & DELICIOUS - SEIZED BY THE BOYS IN BLUE!

SBSS prides itself on our fifteen-year relationship with the brave boys of the Shaggy Butte Police Department. Our close ties mean we get FIRST DIBS on any sandwiches sold at police auction, seized from crime scenes, confiscated from suspects or released from the SBPD evidence locker. BIG OCTOBER NEWS: the recent cocaine bust on Cubano Express led to an UNPRECEDENTED SANDWICH SEIZURE! Over 600 kilos of clingfilm-wrapped primo Cuban meat sandwiches were recovered, and Sandwich Surplus is selling them at CRIMINALLY LOW PRICES. Commandeer one today-- in the name of the law!

REMINDER: Our FINDERS KEEPERS SALE is almost over! 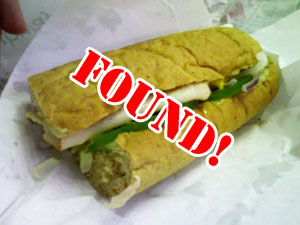 We've only got 32 sandwiches left from our 2011 FOUND SANDWICH SWEEP and FINDERS KEEPERS SALE! Back in August, we scoured Shaggy Butte's streets, parks and dumpsters for the most delicious discard sandwiches, lost & found sandwiches and "undiscovered" sandwiches. We pulled in over three hundred of them, and customers say they're some of our tastiest wares ever. Less than ten percent of our found sandwich stock remains, and these treasures won't stay on our shelves long. Among the sandwiches still waiting for a qualified buyer: a succulent PULLED PORK BBQ SANDWICH found fully wrapped on a bench in Nugent Park! A tasty CATFISH PO-BOY in LIKE-NEW CONDITION, abandoned on the 29 Bus! A fully intact DELI MEAT SANDWICH carelessly discarded near Marshall Elementary. ACT QUICK and one of these delights could find a new home-- IN YOUR MOUTH!

SPECIAL OFFER: Are you IN THE CLUB?


Next time you feed your family at the hottest sandwich discounter in town, remember to pick up a Shaggy Butte Sandwich Surplus SANDWICH CLUB punch card for maximum sandwich value! A lifetime SANDWICH CLUB membership only costs a quarter, and each of our punch cards is made from 100% legally edible salted paper pulp hardtack. Each time you buy a sandwich, we'll punch out a slot-- and after all nine are punched out, we'll insert the edible card into your next sandwich for FREE!