Monday, Aug 06, 2001 by Rich "Lowtax" Kyanka (@TwitterHasBannedAllMyAccountsEver)
Know of an awful site? Send it to us and become a hero!

Crash Hotman, submitted by Ethan. ...and, ladies and gentlemen, if you'll all look to the right of the tour bus, you'll see a crazy man who should be put on an ungodly amount of medication and then euthanized, just to be on the safe side. 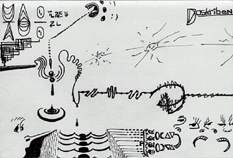 December,1970,I woke up to a voice telling me to "go downstairs and open the door and look up at the "star of "Bethlehem".I did and the star shot down toward me and was instantly this giant sphere floating near the cars in the parking lot. A gentle being was suddenly to my left and took my hand and led me to it but I do not remember the transition of going inside it.The next thing I remember is being NUMB ,all over,and several beings were poking at me with a long ,silver rod.The next thing I remember was waking up the next day and telling my mother that I had seen Santa Claus and he looked nothing like what everyone says....LOL 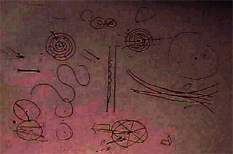 I was explaining time travel in a drawing in 1984

Do you get it now? Do you understand what deep and metaphysical things Crash Hotman is trying to say? At first I thought at first that "Crash Hotman" was the name of one of the enemies from Megaman, but now I realize that it's just the name of another insane psychopath who stumbled upon free webspace on Geocities. In closing, I leave you with the following thought:

Whatever you say, magic link!