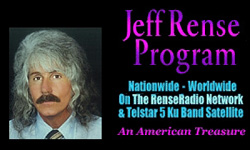 Fed up with the mainstream media's lies and bullcrap, not to mention their silence on pressing issues like chemtrails and the paranormal? Then mayhaps you should put on your tinfoil fedora and click on over to Rense.com, an alternative news site that's not afraid to report the truth!

Just about all your favorite major conspiracies are represented here, from venerable standbys like UFOs and mind control to newcomers like the Sandy Hook "hoax" and UN Agenda 21. The usual boogiemen are here too, from the Illuminati to Big Pharma to Monsanto to gun grabbers to George Soros, but mostly the Jews, who are apparently responsible for everything bad, ever. One exception is Hitler, but even that's up for debate according to the linked story "Was Hitler a Zionist stooge?"

All these nefarious schemes to dismantle Christian culture are obsessively documented by conspiratorial luminaries like former KKK Grand Wizard David Duke and photo manipulator David Dees, who clarifies that both he and Rense.com "are PRO-Jewish, but extremely ANTI-Zionist." That disclaimer doesn't quite explain this charming screed that calls Judaism a "ridiculously laughable serpent race," but hey, you can't expect Jeff Rense to read everything that's written on his site.

Lest you think it's all doom and gloom on Rense.com, there's also a "Feline Adventures" section featuring links to kittycats getting into all kinds of mischief. Even Holocaust deniers love cat videos!