Weather Modification, submitted by R-Lo. Lately everyone seems to love drawing circles on innocuous photos and draw conclusions that something terribly important is happening. By "everyone", I mean "the completely insane bottom feeding wretches who frequently show up as an Awful Link of the Day." Reaching all the way back to yesterday's ALoD, Rich managed to track down another interweb site belonging to superstar crackpot "Crash Hotman" and this one happens to concern the fact that the government is controlling our weather patterns in an effort to TURN SUMMER INTO WINTER!

Strange chemical trails in the sky? Weird weather patterns? Christmas in July sales at JC Penny? Fear not conspiracy-theorists, Crash Hotman is on the case!

I only noticed them and started to study them after a UFO encounter in 1998 revealed clues to technologies that were apparent but difficult to fathom. Key words like "plasma" and "orb" and "air force base" led me to HAARP..and that was all it took to get me hooked. My other site is HAARPMANS alter ego..Crash Hotman.

Crash Hotman is a super sleuth. He looked up "plasma" and "orb" and managed to find information about chemtrails despite having to sift through 500,000 Quake and Unreal Tournament sites talking about the new "Plasma Orb Beam Caster Cannon." I also think the musical group "Orb" has a song with "plasma" in the title, although I'm not sure, my idea of music is my collection of wax-cylinder recordings of Thomas Edison banging a pot with a wooden soup spoon.

Despite my apparent disdain for what Hotman, M.D. does, I consider myself a bit of an amateur investigator of the paranormal. In an effort to match wits with Lord Hotman, Esq. I have put together a careful analysis of the current weather patterns over the continental United States. 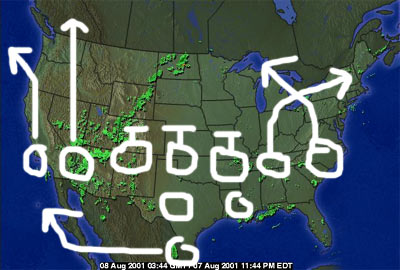 What you see here is the classic Majestic 12 Gridiron activation play. The tropical depression hooks left and the gale force winds drop back to fake a pass to one of the cross cloud banks on the right wing. Then a short lob just across the line to the gale force winds and BAM!!! TOUCHDOWN!!!

Watch your back Hotman, I'm onto your schemes and they smell like trouble!