I've attended all 14 previous Warped Tours, mostly because I was on assignment for some publication or Web site, though the first few lured me because I was a stupid kid with a Mohawk who took Pennywise seriously. 15 is a nice, round number, so if I make it through this one, I'm done. The end is near. Fuck Armageddon, this is hell. 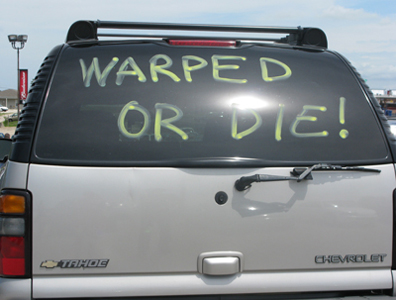 I called last year's Warped Tour a "brain rape" and a "torture marathon." I stand by these descriptions, because it remains the most harrowing musical ordeal I have ever endured, just a relentless gauntlet of rifle butts to the crotch. No matter what ungodly genres the idiot musicians of the future create, I'll just sigh and say "Things could be worse. I know, for I lived through Warped 2008," like how Great Depression survivors scoff at the current economic fuck-up.

Granted, all Warped lineups have had serious flaws. It's not like I'm pining for the halcyon days when Limp Bizkit (1997) and Kid Rock (1998) haunted the tour. In fact, things might be improving. Warped has always been Russian Roulette. 2009 is the first installment in years that's considerate enough to include the occasional empty chamber.

Still, I don't want to feature the same events/bands more than twice in this column, so fuck it, this is it. This is the last time I drive to the middle of nowhere to trudge through parking-lot gravel while listening to some 12-year-old girl's princessy concept of a heavenly soundtrack. This will be my final experience with a festival that punishes exploration by freeing unspeakable evils from MySpace quarantine. And this is the last time I'll hear the same fucking "Boner Springs" quip every retarded band thinks they're the first to make when they descend upon Bonner Springs, Kansas.

I heard that joke literally within five minutes of my arrival. As I shuffled warily through the gates, a disembodied voice asked "is it cool if I say Boner Springs, or is it offensive?" Well, it's neither, much like how these guys were neither smart nor punk despite playing the "Smart Punk" stage. These mystery clowns provided an overture of the worst of what would follow, with generic breakdowns, pitch-corrected pop/R&B crooning and pointless screaming. The group's sole redeeming factor was that its drum set read "Fuck Breathe Carolina," but that goodwill evaporated when I learned this was, in fact, Breathe Carolina. This set the tone for an event painfully aware of its own shittiness. 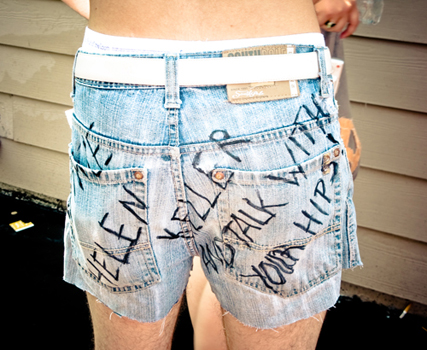 Warped generates its time slots randomly each date. Having arrived at noon, I missed the early-shift acts, which at this tour stop were fruit-metal dance troupe Attack Attack! and slapstick-crunk minstrel show 3OH!3. Apparently, some people appreciate these blatant joke bands on an unironic level. It's like someone absolutely loving Date Movie or Scary Movie without even knowing they're parodies or recognizing any of the references: It's indefensible to enjoy these things under any circumstances, but it's incomprehensible to do so without awareness of their context.

I could relate more easily to the 50 or so people who were clearly there just for Bad Religion. They were easy to spot: Most of them were 30 or older, with Bad Religion tattoos, or in some cases Misfits/Crass tattoos and faded Bad Religion shirts. They weathered the early-afternoon shit-storm with grizzled contempt, released their pent-up rage during Bad Religion's 3 p.m. set, then probably left immediately afterward. They paid $40, took the day off work and drove to Bonner Springs to see Bad Religion play for 30 minutes. I'm not sure if any of these new, awful groups will engender any such sense of devotion from their fans even 5 years down the line. I certainly fucking hope not.

Right now, randomly popular twinklers We The Kings boast Warped's most passionate following. They opened their set with a song that contained the invitation "scream it like you mean it," and thousands of pubescent girls screeched in response. Seeking refuge from the shrill, feminine voices -- and the fans who seemed to find them so pleasurable -- I stumbled upon Shad, who was speed-rapping over a Cure sample. Shad counts as one of Warped's rare happy accidents. He freestyled some and played the guitar, while his DJ mixed and scratched live. Maybe a dozen people saw this impressive performance, because everyone else was pied-pipered into We The Kings' glittery vagina.