Last week, ALotD warned you about the FOX-mas event in December. After three years as a house party, FOX-mas was set to make its hotel debut, as one of the organizers explains: "We decided to expand it and get a ballroom, but as we negotiated with the hotel, the concept grew into a mini-convention." Unfortunately, these "negotiations" with the hotel apparently didn't include disclosure of the fact that FOX-mas was being billed as an adults-only furry free-for-all.

"I am appalled and extremely embarrassed," wrote a manager from the besieged Rochester Holiday Inn in response to the Awful Link write-up. "This is NOT the reputation we want anywhere near our hotels. In no way, shape or form did the planner mention anything about Furries as they are called and what the group does for 'fun.' I asked him about the group during negotiations. He told me this was for a mini-convention of mascots." When reached to confirm by phone, the representative described how she expected the hotel lobby to be overrun with people dressed like "the Pillsbury Doughboy and the Geiko gecko," not, say, lascivious wolves creating fursuit friction with cheetahs.

So, FOX-mas will not be held at the Rochester Holiday Inn. Feel free to resume family-friendly booking there. However, the organizers will surely find a venue receptive to their costumed romp. Furries always land on their feet. 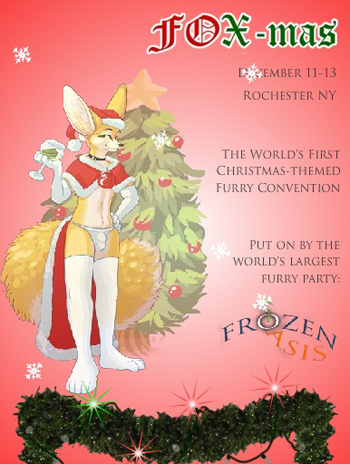