A new front has opened up in the war between breast men and ass men: nose men. Their base of operations is at Pinnochia.net, where big-nosed women are appreciated, and even sometimes created!

Over in Big Nose Appreciation Discussion Board's Big Nose Appreciation Page forum, members scour the 'net for babes with big schnozzes, whether they be celebrities, normals, or anime characters. Photos are posted for the enjoyment of all ... nothing lewd, fellas, this is a family-friendly fetish!

Now, big noses are like fine wine. Some members can appreciate the aesthetics of a quality honker:

Others, like BRAND_NOSE_LOVER, dispense with the jargon and cut right to the chase: 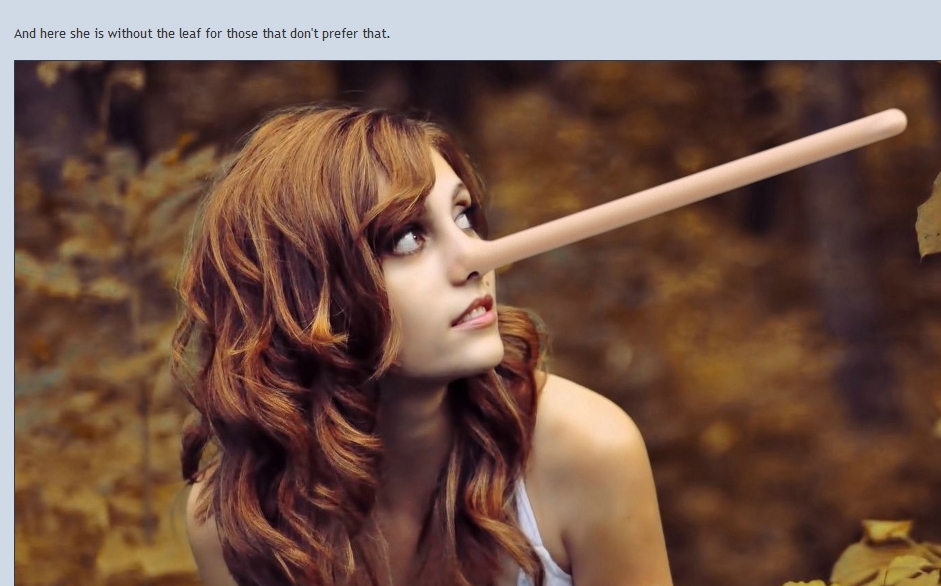 'Round these parts, user Drachen is the undisputed Pinocchia master. Just take a gander at his morphs and see if they don't get your motor running ;-)

Real girls not your style? Try this one of anime superstar Hatsune Miku on for size!

There are also some great yet formulaic stories about women cursed (or blessed??) with rapid nose growth, like this Voyager fanfic:

"Wow! Did you see that, Seven?" Tom Paris asked, smiling slightly. "I guess Captain Janeway NOSE what she's doing!" Seven looked at him coldly. "Mr.Paris, all that has transpired here is that the Captain's nasal area and reach has increased due to the injection of alien nanoprobes into her bloodstream. I find no amusement in either her situation of your attempt at humor."

Of course, there's no substitute for a vivid imagination. Take it away, Darknose:

If my girl friend would have a Pinocchio nose curse I would wait for us to come home after a long day at work and when we have dinner I would ask her uncomfortable questions hoping the get her to tell some small fibs that makes her nose just grow an inch or two longer.

At this moment it would make her so uncomfortable that you can hear her hearth bounding because she doesnt know how to get of this and she would now tell a big lie to cover up her lil fibs and then hoping that her nose would shot out to banana sized length.

Getting some shock reactions, blush red face. touching and rubbing her nose in shame.

Oh that would be a dream...

Over the span of six months, Darknose and forums peer dpdm56 spun this fanciful scenario into a brainstorming session about the heroic feats Hypothetical Pinocchio Girlfriend might perform! Their March 2013 call for someone else to share their thoughts remains unheeded, so feel free to pitch in, but, again, no sickos please. This is all about "using her nose to help and save the community"! 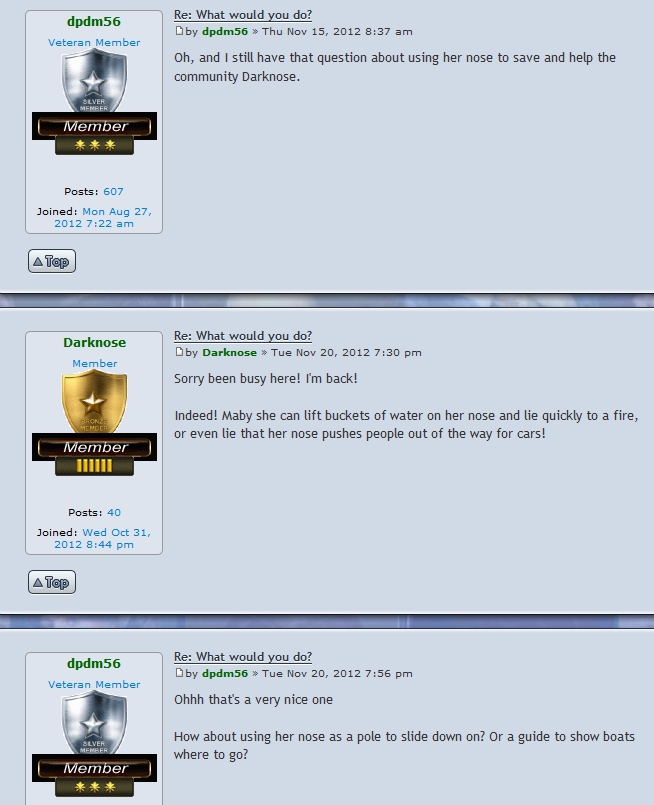