I’m not exaggerating when I say Secret Service: Security Breach shocked me; this is seriously the worst game I have ever paid money for. The only game that even comes close to it is Infiltration, and that was a free two-level demo of a game that will probably never be completed now that the author has stopped updating his site and begun pursuing a far more lucrative career at Dairy Queen. And as bad as his game was, the creator of Infiltration was at least able to brighten my day when he responded to my review with a long, angry series of run-on sentences about how wonderful everyone else thought his game was and how the only reason I made fun of it was that he had hurt my feelings earlier by posting a very clever “man that site really is SOMETHING AWFUL” zing on some message board I’ve never heard of. I really doubt the 4D Rulers people will be mad enough at me to send me any messages, since my purchase of Security Breach probably accounted for 20% of their company’s sales revenue for 2004. 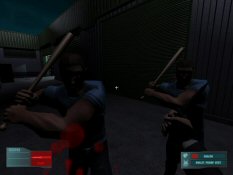 The baseball bat brothers are formally introduced to Professor Shank!How bad could it possibly be, you ask? Start up the game and run around for ten seconds, and you’ll discover that Secret Service is powered by the sloppiest, most bloated game engine known to man. Worse than the Lithtech engine. Hell, it’s even worse than the Pie in the Sky engine. If you want to rebind your controls, you’re in for a horrifying surprise, since no matter what you change on the control config screen, the game is permanently stuck in the default control scheme. It’s literally impossible to rebind your controls from the config menu, and I can’t believe a problem like this wasn’t caught before the game shipped. But don’t worry, that isn’t Security Breach’s only technical problem, not by a long shot. This game somehow managed to choke the life out of an AMD Barton 2500 with a gig of memory and a good video card. I wouldn’t have thought you could code that inefficiently even if you tried, but I think I’m underestimating 4D Rulers’ capacity for spectacular failure. The game runs at probably 15 frames per second when you’re just walking down a hallway, but if you encounter any enemies or, god help you, stairs, everything will come to a screeching halt. But if you want to look on the bright side, the engine is incredibly slow and clunky even during the rare times when there are no technical issues, so drawing more than 15 FPS would probably be a waste.

Secret Service is powered by 4D Rulers and Slam Software’s custom made “Amp II Game Design System”, and I pray to god no one uses it ever again. Moving around feels incredibly awkward, like you’re gliding and gradually tilting your head while “clop clop clop” noises emit from just in front of your head. Actually that’s where all noises seem to come from, since there’s no locational sound at all, so it’s impossible to tell whether the occasional loud lines of annoying dialog are coming from you or from a couple of terrorists having a super-secret meeting around the next corner. The walls, which hunger for human flesh, frequently take advantage of the game’s shitty collision detection and eat your hands.

The level design consists almost entirely of completely static hallways linked by doors. Unfortunately not all of the doors actually open or lead anywhere, and the ones that take you to the next part of the level look exactly like the ones that are just sitting there for decoration. This means that the only way to get through the game is to walk down each hallway past the rows and rows of doors, walking up to each one and pressing the use key to see if it takes you anywhere. Since every level consists of 17,000 of these hallways stapled together at random angles and littered with crates and empty bookshelves, it should take the average gamer between one and two of these trial-and-error sessions before deciding to uninstall the game and run the CD through a grain thresher. 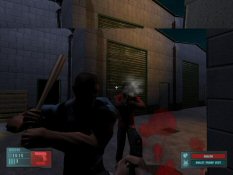 The enemies can shoot you with magical bullets that make the video tear.And hey, if you want to use the Amp II game engine for your own game, you can do it for a mere $2,000! Unless you want to use it on more than one computer, that is. That will bump the price up slightly to $25,000. And if you feel like e-mailing 4D Rulers with important Amp II-related business inquiries like “who are you and why the hell did I buy this from you”, you’ll be happy to know that for the low price of $500, they will respond to your e-mails within two business days for a whole year! Wow! I assume if you haven’t paid the $500, your e-mail will go straight to the ignore pile. I mean hey, all you did was pay them $25,000, they don’t owe you anything. I was skeptical about this deal until their website informed me that “Other game engines of this quality can cost up to $1,000,000 to license.” That makes the $500 fee for the privilege of calling them idiots seem downright cheap!