Conventional wisdom holds that attractive females could easily coax sexual favors from any available man, and many unavailable men as well. George "Vampire Lord" Kistner III isn't so optimistic about their prospects. His Web site suggests good-looking women are so desperate for cunnilingus that they'll gratefully photo-audition for the chance to be pleasured by a scrawny goth felon. "We can consider my admiring your naked body to be my payment for services rendered if you feel uncomfortable about getting something for nothing," George generously offers on his "Terms and Regulations" page. It's unclear if anyone has accepted his proposal -- his guestbook signees use dubious names like "Ashley Olson" and link to nonexistent MySpace pages -- but if it works, expect a flood of disciples following in his ladykilling footsteps, not only by launching GIF-packed sites, but also by committing armed robbery, becoming Wiccan Priests, collecting Transformers and getting sweet "Burning Sigil of Baphomet" tattoos. 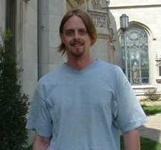