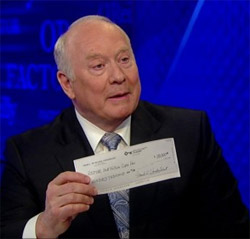 A stink has been brewing over at Fox News about a posting on an Obama extended universe website called "Keeping GOP Honest." The 4/20 posting lists the names and contributions of several Romney mega-donors (six figures and over) contributing to various Romney Super PACs.

Normally, political donations are public information, but not when they are giant donations made through Super PACs. Billionaires deserve anonymity when influencing the political process with their money. The Supreme Court said so. To reveal their names and public activity in a list suggesting they aren't totally good constitutes "terrorism."

I'm on board with Fox News on this one. There's something creepy about a list of names. It's very Orwellian. You know who else kept lists of names? George Orwell. Looks like Obama learned his tricks from the best.

As the pressure builds to Do SomethingTM about this OutrageTM I have decided to mirror the posting here to prevent the destruction of terrorism evidence when Obama's campaign is inevitably shamed into removing it.

Check out Zack's recent article about dystopias on science fiction site Tor.com or his debut novel, Liminal States. Or don't. That's your mistake to make, my friend.