You can also see a crappy, photocopied-looking watermark version of this logo whenever you mouse over an image on this site!

It's tempting to call Quasi-Modo one of the few sites that has survived past the Geocities endtimes, but dear lord, it was made in July of 2004. What we have here is a bona fide insanely made website. It's a mish-mash of html and crazy, with weird splotches of randomly chosen color tags appearing wherever the chips may fall. Also, the tags say things like "fat" and "legless et al." You'd guess, if you had to, that the kind of nerd who would obsessively research freak-show performers would be the kind of nerd who could read a book or two about web design. You'd be wrong.

Content-wise, you might expect that someone who has cataloged decades and decades of "freaks" who were abused and alienated for profit might view his subjects with a sympathetic eye. And the quotes he chooses seem to support that, suggesting that, at freak shows, the real monsters were the ones watching. Still, it kinda sends mixed messages when one of the descriptors he uses in his unmissable multi-colored intro box is "pranks of nature."

For such an insane undertaking, this dude is thorough. (Dude Fact: Did you know that a circus thin man billed himself as "The Skeleton Dude" back in 1888? Now I do! Thanks, Quasi-Modo.net!) It's a kind of thoroughness that would make significantly more sense if it were, say, a book or encyclopedia rather than a pink webpage with clickable butterflies and bold, italicized, and underlined links. But still, dude loves his circus freaks! Way, way too much! And you might ask why. But the why is something you'll never know. Hell, it's something you should never know, because the why is something so beyond our comprehension, so specific to one person's mentality, that to know it would require you to transcend your own experiences in a way that just isn't possible in your corporeal form. 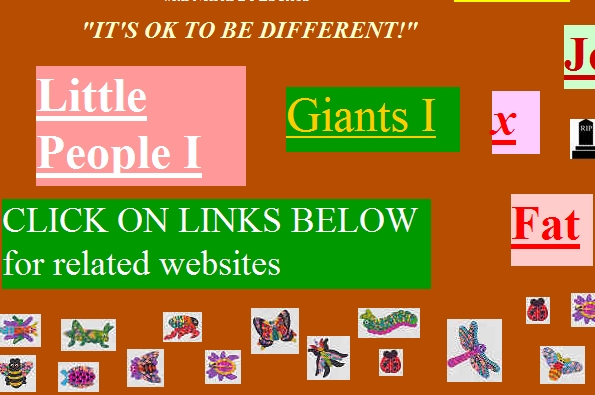