Ultimate Surrender bills itself as "the only non-scripted real wrestling on the net." As stated, this claim isn't really true, but if you alter it slightly to "the only naked-women-wrestling-and-the-winner-makes-the-loser-suck-a-strap-on-even-though-it's-hard-to-imagine-that-being-pleasurable-for-either-party site," then it becomes truth in advertising! Look, it's not shocking that this exists, or that there is an audience for it. Some people will watch nude athletic women do anything, and some people will watch anyone wrestle, and the Venn Diagram for these groups looks like an eclipse.

Wow! The inner confrontation between the Dragon and the Assassin was a showdown of the best tecniques of US wrestling styles and there is something quite new in the fiery resistence of all the girls against the tag team.

Outstanding first round ladies. Equal abilities make for extraordinary competition. Evenly matched and both teams are executing their game plans to the best of their abilities. 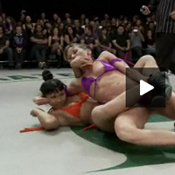 This is pretty much the only work-safe screen capture I can use from this evenly matched "showdown of tecniques" they're referencing; apparently, the wrestlers actually wear bikinis for at least the first few seconds of the bouts. This image points out the second amusing aspect to Ultimate Surrender: The live gymnasium audience. I'm not sure who I'd expect to be in attendance at this sort of real wrestling/staged female-on-female sexual assault event, but I certainly didn't envision a bunch of business-casual-dressed middle-aged dudes and twentysomething couples. When looking at these shots below, and noting the bemused-at-best expressions, keep in mind that there's some really fucking vigorous sexual activity taking place literally inches from these people's faces.