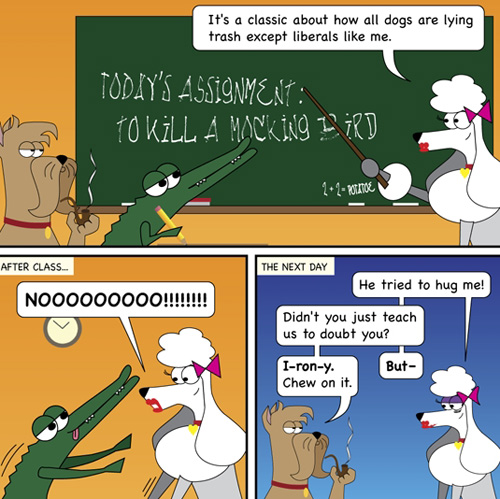 "According to my newspaper, To Kill a Mockingbird, that classic of anti-white propaganda, has been boring school children for fifty years, with no end in sight. You can question the Bible or Aristotle but you're damned if you question that boring ugly book. Just another reminder to retake the media. That's why we started Lone Nut."

This strip is pretty subtle, so I'll break it down for you. Terriers have mustaches, they're guys. Poodles have bows, they're women. They're also completely irrational and love talking themselves into corners. If you've ever owned a poodle, you'll probably get it. Oh, and camels are Arabs, because they're not even people.

In this Mallard-Fillmore-but-worse world, every character is completely retarded. They're also very upfront about their ulterior motives, which doesn't seem to make much sense given that this makes them openly hostile toward terriers. Though, in all fairness, there appears to be only one terrier in Lone Nut land, and he seems to be a real asshole, which leads me to believe the rest of them were executed.

Despite only having produced a handful of strips during its first four months of existence, Lone Nut Comics has already ascended to the top tier of ridiculously right-wing echo-chamber Web comics. PRO CLICK ZONE! 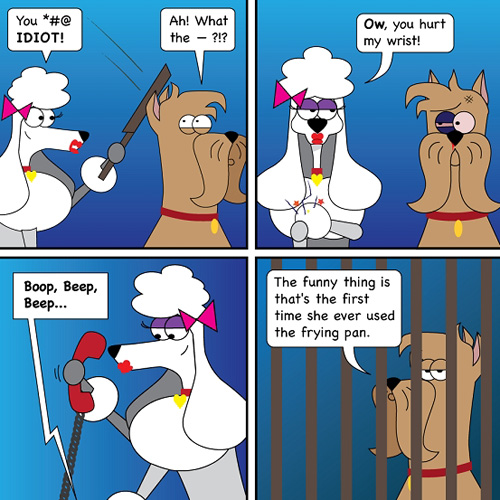