Sometimes, ALODs fall straight into my lap. Just a few minutes ago, I received an e-mail addressed to "Dear Inc.," the body of which consisted entirely of a poorly compressed screenshot of a website. At first I tried to find the site by tracing it from the email, but despite the fact that the email came from exports@chinainflatable.net, chinainflatable.net doesn't actually exist. So instead I squinted at the screenshot until I made out the phrase "Zhenhan Inflatables," which led me to the actual site (predictably, www.zhenhaninflatables.com).

Basically, it's a place where you can buy pretty much anything inflatable for the bargain-basement prices we know and love from China. For the most part, it's just the type of shit you see at used car lots, but there are a few items that show how hilarious the Chinese think we are, like this giant pack of cigarettes, or this delightful Obama balloon: 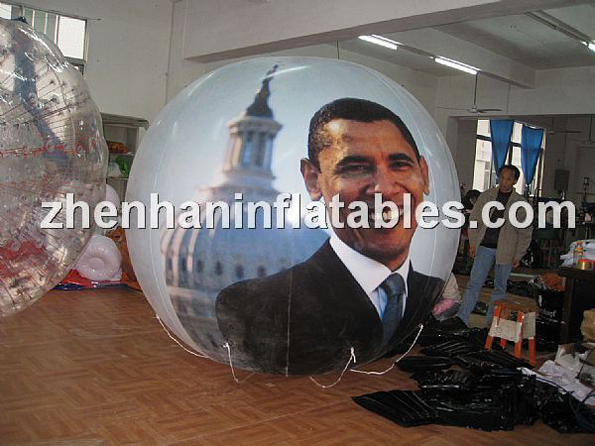 Really, the great thing about this site is the writing. Yeah, it's just Engrish, and that shit's all over the place nowadays, but every now and then I see something truly charming, like this sentence: "For years, we have kept products in good quality, enjoy a big reputation in flatable field." I mean, come on, that's adorable. Plus, there are videos and a confusing little FAQ section. Anyway, given that these people will rule the world in like 20 years, it might be a good idea to get acquainted with their customs. So, take a little bit of advice from their "About Us" section and "Why not try!"

Update: Zhenan is not necessarily on the top of its game. Perhaps this is because they are "moving factory," and as such "we will have phone and internet problems about 7 days," though it's been about 6 weeks. (This update sat in the system for a while because the site actually seemed too broken to be an ALOD, but it's about as fixed as it's going to get, and most of the menu links still work, so whatever.) Anyway, there are some strange quirks, like how the listed price for every item is "negotiable," and how the listed inventory for 7 of the first 9 balloons is "0." Also, they appear to be completely out of blimps. (Ron Paul 2012!) But their mission ("to have the highest standards and principals and to be at the fore front of echnology to be superior in our integrity") remains vital! Contact them at once!