Forever A Kid (Thanks, Paul!) 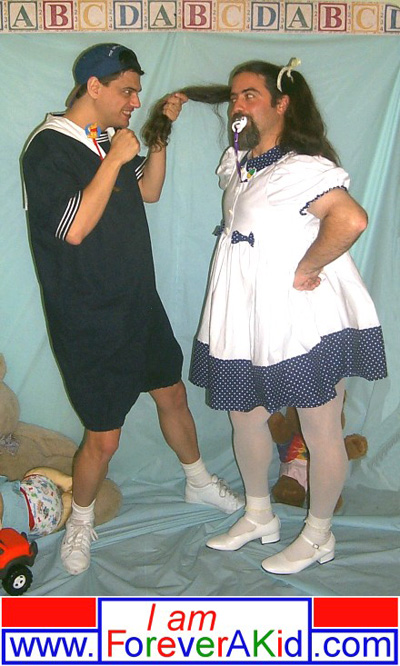 Ugh. Well, I guess it had to happen to me sometime. Time to visit an adult-baby fetish site! Don't pretend like you don't know what that is, because I'm sure we've made fun of grown-ass people who dress up like babies in this space at some point. Hell, I know for a fact we've covered the even-worse sub-fetish of adults who wear diapers. Please note, just knowing that other SA writers have also had to look at these things doesn't make my life any better.

Anyway, what we have here is not only a fetish site, but also a fetish store! Apparently, some woman found out her brother "Daybee" was into wearing booties and whatever, and she decided the best way to build up her relationship with him would be to make the kind of clothes he likes to have weird kinky sex in! So now we've got Forever a Kid, a delightful site through which you can purchase only the finest impeccably tailored size-38-waist pantaloons. Great.

The best part is that they have models showing off every item they make. From what I can tell, there are three models: a guy who looks to be in his mid 20s and might have inadvertently discovered his love for the fetish while he was pledging; a large, hairy man who's probably a few years older than the other guy; and someone who appears to be a woman but is smart enough to hide her face. It seems like they pretty much decide at random who will be modeling which garment, because I guess if you're going to be dressing up as a baby, you've probably already admitted to yourself that gender is a social construct. Or maybe the thrill just comes from dressing up as a 4 year old? I dunno, I can't get inside their heads. Thankfully. 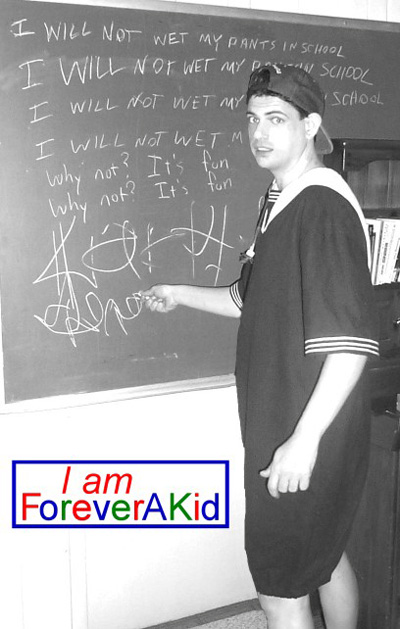 'I hope Chet and Phil don't find out about this!'