The Flag Factory (Thanks, Hollisbrown!)

Wednesday, Apr 06, 2011 by Daryl "Fucking" Hall and Andrew "Garbage Day" Miller
Know of an awful site? Send it to us and become a hero!

Listen, motherfuckers, theflagfactory.com doesn't have time to dick around. This site is about one thing, and one thing only - flags. None of this "one-stop shopping" bullshit, just flags. Why bother fucking around with fancy Web design when there are flags to sell?

I mean, yes, sure, there are other things on the site. Weather vanes, "yard guards," and two big outlined boxes at the bottom of the front page that don't seem to be outlining anything much at all, but who really gives a shit? They've got flags. They've got all kinds of flags. You want a flag from the Civil War? Just click the link, and ... oh, page is under construction. Well, fuck that anyway. How about an ancient pre-1700 flag? Hmm, construction again. Goddammit.

Whatever, let's get some personalized Steelers shit! Hell yeah! My name on the Heinz Field scoreboard! Well, not really. A badly Photoshopped picture of the field, a tribute to a memory that never was. Or a terrible comic book where you [your name here] win the Super Bowl (does not include the sexual assault charges that come later)! Plus a bunch of boring shit like Steelers-logo address plaques, but no one cares about that. Speaking of things no one cares about, there are also three Pittsburgh Pirates flags. Anyone wanna guess where the flag factory is located?

You can get flagpoles, too! In case you need a way to fly the flag you just bought from www.theflagfactory.com! Honestly, I kinda like this site. Yeah, at first it's a little overwhelming. But overall, I can find what I want. I don't need to worry about Flash buttons jumping all over the place and sidelined Twitter feeds, all that. Just flags, dammit. Flags. 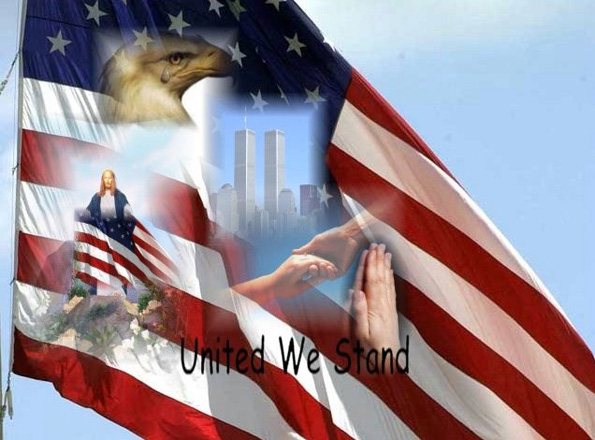 comic sans.
You know, DFH, while we're on the topic of flags, I'd like to share with you a few designs that theflagfactory.com, for all its selection, doesn't have in stock, and doesn't even have an "under construction" placeholder for that promises they'll be in stock in the future. I'm talking about Cathy Wood's Most Patriotic Images Ever at theflagpole.com. In this series, Cathy pays loving, respectable homage to America's original Cool Rockin' Daddy: Jesus Christ. Even the menu tabs on this site means business: There's a tiny flag icon with "USA" written on it in little letters, just to make sure you never forget. And when you get done with Cathy's page, there's plenty of other stuff to see. - Garbage Day 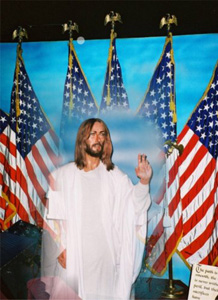 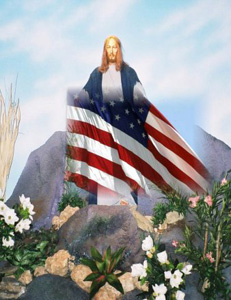