In the mid-Nineties, life as we knew it was changed forever. Bulldog released the popular video game 'Theme Park' and we all finally had our eyes open to the disgusting secrets behind the running of amusement parks. These places were not magical kingdoms blessed with fun and happy animals, they were profit driven hellholes that did the bare minimum to ensure that people didn't die because it would be bad for business. We also got to know a little about the kind of people who spend time at these places. Now we wish we didn't. Is it possible that the type of person who would spend time and money to meet Mickey and friends would not be someone you'd like to hang out with? Let's ask the forum goons for their experiences on visiting The Happiest Places On Earth™©® ALL RIGHTS RESERVED FUN TIME CORPORATION 2007 ANY MISUSE OF OUR PROPERTY WILL RESULT IN JAIL FOR YOU AND POSSIBLY A STABBING. 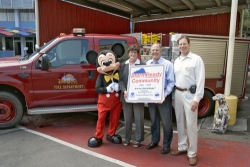 I have a friend who worked at one of the restaurants in Disney world. She would receive one or two marriage proposals a week from people trying to get citizenship.

I used to work at an amusement park. People are real cunts. My favorite story, fortunately, did not happen to me.

After work, a lot of the rides people would usually go out to eat at and bitch about the stupid fucking people in the park. It was a small park, so we were all probably bitching about the same people. Well, a friend of mine had been at the top of the hill on the log flume, where she was able to see what was going on with the entire ride, save the tunnel. At around the end of her shift at that post, a couple comes out... fucking the hell out of each other. My friend was in a complete state of shock and just let it go, right past her, a mere six inches from her face. It's amazing that they didn't get hurt going down the hill. The person who was loading people into the logs at the station did react, however. He stopped the conveyer in the station and called security. The people got a lifetime ban from the park.

To this day, I still can't wrap my mind around how they were able to pull that off in such a short amount of time. The tunnel lasts about 20 seconds and it's really bumpy. The walls are covered with Vaseline so people can't stick their gum to the walls, so the girl could not have used it to brace herself in order to turn around and get on top of the guy. Whoever and wherever you lovebirds are, I salute you.

Someone dumped a pair of underwear full of shit onto the floor of one of the toilet cubicles so it splattered everywhere in one of the Disney Parks in Florida. I suppose that could happen anywhere though.

Sea World is part of the Busch Gardens family, so they have Anheuser-Busch beers on tap at the food places. You simply get a cup, walk up to the attendant, give them your cup and tell them what you want. Free beer!

We saw a guy in one of those power-scooter-wheelchair things with about four of these "samples" on his tray. He was running into things and when I asked him if he ever had a DUI, he laughed his ass off.

Two weeks ago at Disneyland I watched a 400-lbs redneck lady in an American flag T-shirt and her wisp of a mother drag her screaming 3-year-old daughter through Haunted Mansion because "granny ain't ever seen this 'un and I wanna go too so you're coming with us". The girl was absolutely hysterical: "no mommy it's dark in there please please please I don't want to go in there", but they dragged her in, kicking and screaming, and the doors locked behind them.

Come to think of it I'm surprised the attendants let them in.

I was punched in the face by a carnie when I was little. The carnie took a swing at his own daughter who so graciously got out of the way allowing myself to take the hit, as I was standing behind her.