Another Album Born On The Forums!

In late 2005, Something Awful had the privilege of introducing Stabilizer to many people. The talented guys had come together to create an album featuring a variety of styles, and was generally received with much praise. But there was something a little unique about Stabilizer which kept them close to the hearts of everyone here at SA. You see, the entire band have never met together in person. They came together on the SA Forums, worked their magic over the internet, and came up with their debut album, 'A Project Called Red'.

If you haven't looked at your calendar in the past 500 days or so, it is no longer 2005. According to the expiry date on the milk in my refrigerator, it's 2007, and the Stabilizer dudes are back once again with another album. Known as 'A Fuse Slowly Burning', once again the SA forum goons are loving the sounds provided by the band. And now it's your turn to sample it. 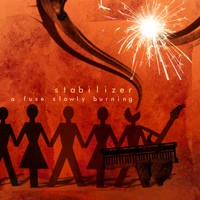 My band is called Stabilizer. In November of 2005 we released our first album, "A Project Called Red," to relatively positive response in GBS. I do synthesis and very little vocals. Goon Aquavita does vocals/guitar/drums. Danoteck does guitar/synthesis/vocals.

Aquavita and I have never spoken. All of our work is done entirely through email/IM. I feel that part of the reason the band works is because we don't really know one another. We never would've begun this collaboration if it weren't for the Musician's Lounge. The album is best described as electronic rock, however I feel we did our best to incorporate several genres into the CD (including salsa, Drum n' Bass, glitch, ambient, pirate rap, etc.). I think you guys will like it a lot.

This second album has a lot of new stuff-

1. Goon Danoteck (aka Captain Dan) is now a full time member of the band.

2. Aquavita plays live drums on a bunch of tracks. I feel that using live drums adds a great deal of energy that the synthesized drums on the first album lacked.

3. New guests! Our resident downtempo/ambient expert Earwicker does guest synthesis on "Sonata in the Key of Jade." A very talented female singer named Emily Rose does vocals on "Needless." Rik Ahern of Blood&Batteries does vocals on Sold To the Devil. Captain Dan & the Scurvy Crew guest rap on We, Conquistadors (although technically they aren't guests...as that group is myself and Danoteck...whatever).

I feel I've worked harder on this CD than anything non-academic. If you like it, copy it for a friend or a stranger. I encourage all copying of the music.

"But Russ", I hear you cry. "You've written all these words and I've still not heard the band's music. Are you some kind of idiot?". First of all, there's no need to be so rude you horse's ass. Secondly, you need more patience, because right now I'm about to give you THREE ENTIRELY FREE samples from the album. Try them out at absolutely no cost, see if you like the music and then perhaps join the ever-growing number of people who think "These guys are pretty talented, maybe if I kill them and drink their blood I will inherit their musical skills"!

The first sample, featuring the song A Beginning is available here (Right click and Save As).

The second sample comes in the shape of Sea of Strangers (Right click and Save As).

The final sample from A Fuse Slowly Burning available for you to download from the Comedy Goldmine is We, Conquistadors, which features the pirate rap talents of Captain Dan and the Scurvy Krew (Right click and Save As).

If these tunes have put you in the mood to hear the rest of the album, check out this thread on the Something Awful forums or Stabilizer's Myspace for more information. Whether the music appeals to your or not, there's no denying that the guys have worked really hard to bring the project to where it is today, and I hope everyone joins me in wishing them all the luck in the world.

Thanks for reading this week's Comedy Goldmine. Obviously I need to pass on my appreciation to Pandabearassault and the rest of Stabilizer for offering their music to the masses. Unless Luciano Pavarotti replies to my email about recording a cover version of Coolio's Gangsta's Paradise, next week's Comedy Goldmine shouldn't be quite as focused on audio. I hope you'll come back next Tuesday, and who knows? Perhaps I'll be joined by my portly Italian friend.