the cops thought they saw dexter speeding away on his boat, but when they caught up to him they found that it was only a dolphin swimming in the sea. 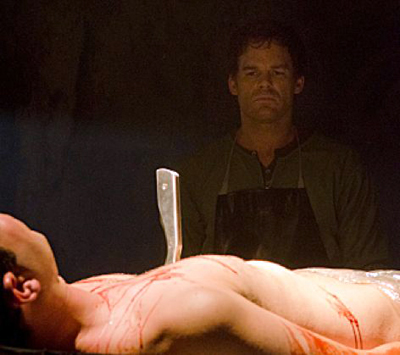 Dexter has finally departed this mortal coil due to cool stabbing death. There's no coming back from this. Update: he's actualy the other, alive guy in the shadows.Yad Rock

the Head Cop closes in on Dexter but spins the tall-backed chair around to reveal a mirror. Dexter looks in the mirror, he was the cop the whole time. he smirks.

Series finale: Dexter thinks about his life and catches himself

stop trying to catch dexter. hes NOT going to get caught

dexter: stop trying to make 'catch' happen. its not going to happen

they caught dexter but he turned into mist and drifted into the atmosphere.

sq came up with this theme and wrote many of the funny posts. His forums contact info consists of an invalid Yahoo address and a Twitter account (a single tweet that reads "DESTROY TWITTER") that appears to have been taken down in the past week. Here is proof that it existed. Never forget.