he got away but they caught him again. they are catching him and theres basically no way out.

update he got away again but they caught him again

[in one breath] They caught him but then he drove of.

they caught him 98 times but he only got away 92 times. dexter still needs to get away 6 times by the end of the ep and theres only 20 mins left 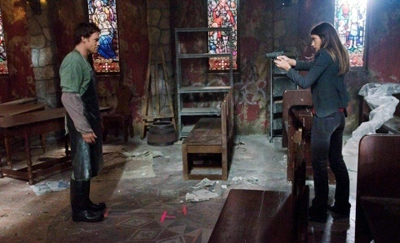 Dexter got out of that last jam somehow but this is different, this is serious.WET BUTT

the fake hitchcock strings are going bananas right now, all the openings are the same but from this one i can tell that dexter is going to get caught, and big time. The cops will come up to dexter and bring him to jail, where the food is not as good as it is in the gastro pub, the kind of pub where you "go astro" from how good the food is and that's why they're named that

Dexter got caught this episode..caught up in escaping the cops once again that is. in return, i was caught up too, in the show's narrative, and then also, after, i caught pokemon in the virtual world of gaming, so basically thre was a lot of catchin going on this mild tuesday night

Review of Dexter season 11: in retrospect it was a cool episode when dexter finally killed the Bastard Bitch Boy Faget Killer, but it was a very bad idea for the series to run an arbitrary contest for full creative control of the show that a weird deviant submission fetishist named trent howell won