DosNetSynth: The Truest Sound for your MIDIs!

In the tradition of "Forums User Makes Something Cool" success stories such as "Son of Strelka" and "SpliceTubes," we have SSH IT ZOMBIE's astonishing DosNetSynth page. Unlike those previous creations, DosNetSynth doesn't have anything to do with splicing, or at least nothing that I could find with a Ctrl+F search for "splice." It does have a lot to do with circa-1992 technology, for those who understand that sort of thing. There's an explanation below, but the concise version is that by feeding MIDI files (those once-omnipresent computer-bleep-rendered instrumental takes) into SSH IT ZOMBIE's set-up, you'll hear familiar tunes like you've never heard them before, from the creepy ghost-whine at the beginning of Gary Numan's "Cars" to the ominous trilling of the "U Can't Touch This" interlude.

There's an uploader in the sidebar, for people who have some MIDI-fied favorites they'd like to hear: 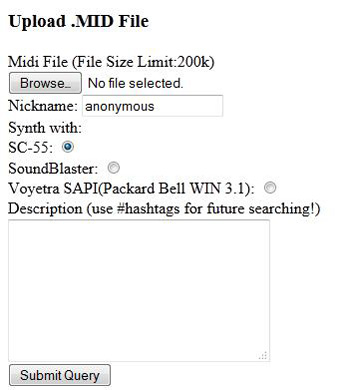 Here's how to listen to the stuff the SA Goons already uploaded:

1) In the left sidebar, click the play button on the audio control, or one of the links underneath it until you find one that works for you.

2) To find an already-uploaded song to play, click "Show Original Posts Only" and scroll through the options. There's also a keyword search if you have a specific song or band you're looking to find. For instance, I typed SLAYER, like I do whenever I see a text box, and definitely wasn't disappointed!

3) To listen, click on the link for the song; the song will appear in the frame on the right side of the screen (blue background).

4) Select your favorite format: SC-55, Soundblaster or Voyetra. If, as is the case with most people, those names mean nothing to you, just experiment with different choices and check out the various old-school effects! 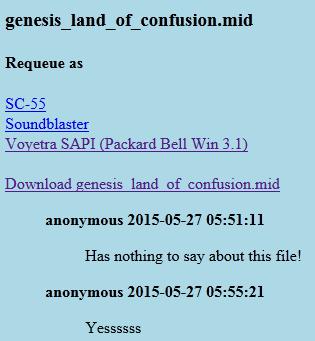 5) Depending on the amount of users or whatever other factors can affect antiquated song-players, your selection might take a while to start streaming. Worst case scenario, you can always hit the download link (as seen in the blue box, above) to enjoy tunes from various eras in the timeless MIDI format; it's a while-you-wait kind of sound anyway!

To clarify, in the words of GBS moderator gnarlyhotep, "if you download the MIDI you're not hearing it on the Roland. You have to use the embedded streaming player on the left side (or one of the alternate links just below it). The difference is that if you play the file locally, you're using your own computer's software MIDI bank. When played on the stream(s), it's being synthed by the old-ass hardware bank (SC-55), which is what makes the whole thing neat.

The other two options (Soundblaster and Voyetra) are similar, but the Soundblaster is being hardware synthed using software MIDI fonts in the SB card's firmware while Voyetra is pure software synth (like most modern computers do), in this case being synthed on Win3.1 (lol)."

Been working on a thing. 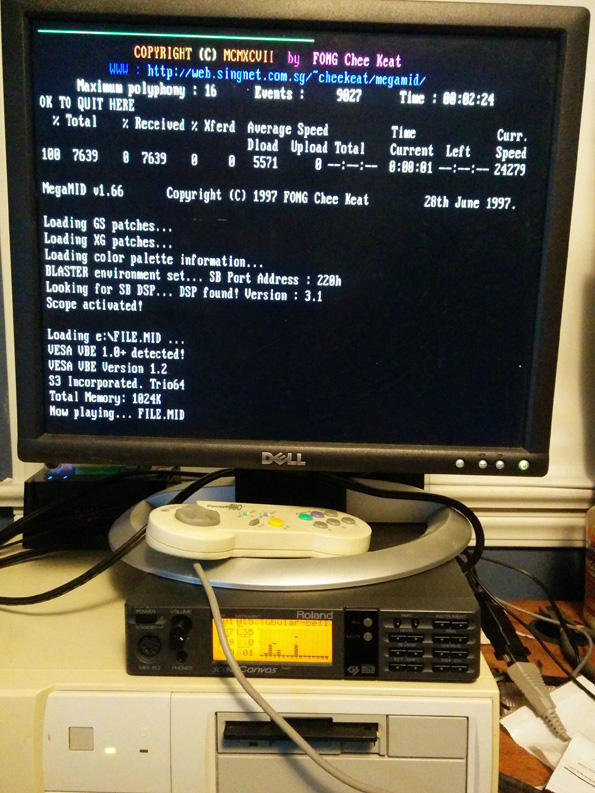 And it's available for you to play MIDIs on. Real MIDIs. The kind your parents played when they were young, when disk space was expensive.

Upload a midi file, hit play on the control. It will be rendered on a 486 DX2 66 running dos with a true hardware Roland SC-55. Be a bit patient. It's an old computer.

A lot of music from the early '90s was written to be synthed on the Roland SC-55 and its various cousins. Emulation of the device via soundfonts has not come close in all areas. Upload a midi and it will be synthed on real hardware and hopefully play over shoutcast. I have a 486 DX2 66MHZ system running a TCP/IP stack in dos via packet driver, along with said Roland synth. For the heck of it I wrote a series of batchqbasic scripts and chained curl + dosmid + some php scripts together. The result is that this here 22 -year-old machine will synth MIDI files you upload, and they will be streamed over an Icecast server automatically in the order they are queued!

It probably is horribly dangerous to put such an old machine on the internet; a backup is in place as this is probably going to be wildly unstable and prone to issues.

Here's some Goon praise from the peanut gallery!

These are some fine and fresh beeps AND boops, thank you.

this is an incredible project and you are a hero.

"My Girl" sounds great. Even on midi, the melody's message comes through.

Lovin' the ones with good bass lines. "Holy Wars" kicks ass (sorry about constantly requeuing it.)

oh my god aqualung is so long

Hearing that Streets of Rage midi file on the Roland was actually really amazing. Lots of impressive details in it that get lost otherwise.

That rad racer track startled the hell out of my cat. Good work!

kinda getting sick of ff7 and mario kart you fuckin nerds