Project Freedom, submitted by me.Ladies and Gentlemen, we cannot let this charade go on any longer. We are all under attack. Under attack by the Worldwide Masonic Government Ritual Child Abuse & Murder Network lead by the World Elite Illuminati Mind Control Agencies, and the Satanic Police Hierarchy of silent warfare. It's just not cool. Thankfully they have been exposed by freedom fighters of the internet called "Project Freedom". Project Freedom has uncovered the vicious, evil plots of the Secret Masonic Government with their expert sleuthing skills, and life threatening investigations. Little does the public know that they are in grave and real danger, being targeted for remote mind control experiment, covertly micro-chipped, and their children being raped and murdered by the Satanic Child Abuse Network. We must stand up for our basic human rights against these monsters! Here is just one of the millions of victim's stirring testimonials:

"I have known since April 1998 that British Intelligence, MI5 and MI6, working in collusion with the U.S. National Security Agency have had a contracted agenda to set me up as a pedophile. Since this first realization, my investigations and research has enlightened me to the fact that our Western Governments via the Masonic Intelligence Network are running their own Pedophile Rings. This same network is inextricably interconnected with the Pedophile Government agents, who have been contacted to set me up toward this agenda, as well as others who have used various techniques, to thwart and discredit my work, of exposing them."

"I originally believed that this "contract" upon me, was first executed in Canada in September 1997, when my young daughter who was 7 years old at that time, came to visit me. Over the last several years, repressed subconscious memories have been resurfacing into my conscious mind regarding uncharacteristic sexual thoughts and emotions of a deviant nature that I experienced during my stay in Australia. These alien manifested thoughts that I was experiencing, started almost immediately after I attempted to enter into the U.S. National Security Agency Citizen Spy Base in Alice Springs in 1984. As the U.S. N.S.A. have been implementing these frequency weapons en masse upon innocent civilians since 1971, and individually since the early 40's, they are undoubtedly, directly involved."

"The realizations that surfaced traumatized me immensely, yet at the same time, enlightened me to the fact that the Masons have in fact been monitoring and manipulating my being, via their Black Occult techniques since I was a very young child. As the Secret Societies are very interested in those, outside the brotherhood, who may have extraordinary abilities I would have therefore been a perfect candidate for monitoring, as well as a Remote mind and emotional manipulation experiment, for the rest of my life. Even although my father, is a low level, (nonpartisan) mason himself. Other repressed memories that surfaced were the fact that I had sexually abused several of my girlfriends when I was a teenager. The bizarre facts regarding these abuses are that, at the time, I did not think, believe or feel that I had done any wrong. I felt no guilt or shame whatsoever. I now know these despicable uncharacteristic actions were a manifestation of the manipulation of Black Occult techniques by the Masonic Government Intelligence Network"

Those dirty bastards! This poor man's life has been taken over by the Masonic Black Occult Network, and now he can't even see his 7 year old daughter without molesting her because they are shooting him with their secret network of remote control frequency rays shot from black helicopters in space. See folks, this is what we are up against. These organizations are only interested in trauma-based mind control, frequency weapons, radiation, torture, drugs, stalking, rape, murder, and parking in handicap spots. But there's more! 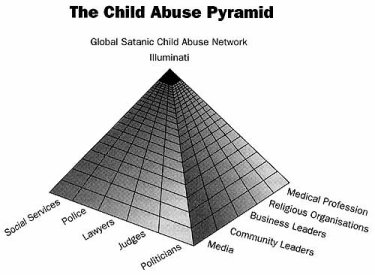 As you can see, almost all professional occupations are involved. Except TV Repairmen. YET.

These bad guys are big into the whole child rape thing. The networks of power in our social structure is set up for one reason: raping small children. Every single lawyer, doctor, businessman, and police officer live to hear the scream of a child being murdered, while the parents are being turned into a zombie with remote electromagnetic rays that can shoot through your house and under the covers. There is talk that they even set up a moon base and have really evil parties up there and use baby skulls as cups. Are you going to sit there and be a puppet, or will you fight with Project Freedom? Here is another testimonial from a man who refuses to be intimated by these thugs:

"A message to the 5 spineless, low life, ‘pedophile protecting’ government agents from the 'Core of Rape' who wish to have a ‘go’ at me. On Wednesday evening 13th February 2002, Marina Findlay was in the Maltings Pub, St Leonards, Edinburgh to do her weekly performance of anti-mason/anti- MI5 poetry reading. At one point during the night, she overheard 5 ‘tough looking’, ex-army type men who were discussing me, out aloud. The name George Farquhar was mentioned several times by 2 of the 5 with aggressive, threatening overtones, and talking about me as if I was “infamous” to them. As I have only recently returned to Edinburgh to live after 20 years, these “tough guys” could only be associated with government authorities I have “pissed off”, so to speak, since my return in the last 5 months. As, under normal circumstances, I am an extremely amicable person and have no enemies, bar EVERYONE involved in the Masonic Government Intelligence’s Core of Rape, I deduce that these “tough guys” were “sent in” to be in clear earshot of Marina. It is also clearly obvious to me that these government agents from the ‘Core of Rape’ were contracted to be at the Maltings Pub in an “attempt” to intimidate me, via Marina. "

"WELL – GET THIS YOU LOW- LIFE, SPINELESS PAEDOPHILE PROTECTING PIECES OF SHIT! If you want to intimidate me, try coming to the pub when I AM GOING to be there. Alternatively, come to my home address – you know exactly where I live – you gutless scum of the universe and a danger to all-decent men, women and innocent children. P.S. You 5 so-called tough guys have not got a set of balls between the 5 of you – you cowardly parasitical scum!"

You go girl! That's what we all must do, not be afraid of these evil people. We MUST stand up for our human rights, or these people will use us like a pawn on a chessboard, and discard us when we are no longer of any use. I want to thank Project Freedom for bringing this to our attention, and I want them to know that they have a brother in arms in me. Be aware my friends, and don't walk under power lines. (SECRET GIANT CHEETO CODES)