A lot of things can go wrong when you visit another country, according to a documentry I saw recently called 'Hostel'. I'm not talking about unimportant stuff like being tortured and killed, I mean the REALLY horrible crap like accidentally calling a waiter your boyfriend. It might not have been a pleasant experience for them, but thankfully we can enjoy the stupidest comments that the forum goons have come out with while in the company of foreigners. Let the embarrassment begin! 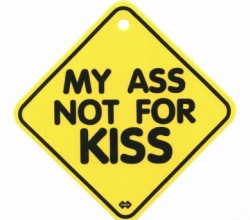 A mistake my teacher made while at WalMart: As he explained it, in his mind, one add "er" to the end of a verb to make it a noun that does the verb. For example, (verb) hang + er = hanger (noun that does verb), or sing + er = singer. You get what I'm saying. Well, he needed to "hook" something. So he asked a WalMart employee (and knowing him) very politely asked where if they had any hookers.

Last year on a vacation to Cuba I rented a moped and managed to break it. When I returned it to the rental place I used my awesome high school Spanish to say I was 'embarazado' about what happened, meaning to say embarrassed. Turns out 'embarazado' means 'pregnant'. I'm a guy.

The only thing I can think of was when I was in my German class and we'd been having a heatwave. I said "Ich bin heiss" (meaning "I am hot"), which made my teacher laugh.

We had a guest speaker in my Spanish class last year, and a friend of mine began a question with "Escupeme" meaning "you spit on me," instead of "Disculpame", meaning "excuse me." The guest wasn't offended, but the teacher and a few of the students burst into laughter. Good times.

"Il faut baisser la tete?"- Is it necessary to lower your head? Meaning: Do I need to lower my head? This was in reference to skiing.

"Il faut baiser la tete?"- Baiser is the French verb "to kiss." It also carries several other...uh...slang meanings. I basically said "Do I need to fuck my head?".