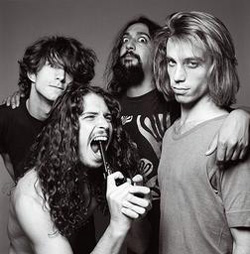 Here's an old promo photo of Soundgarden, back when they were good. Everyone looks like a late-'80s/early-'90s alt-rock stereotype, right down to Chris Cornell's **beautiful** curly rockstar tresses. Cornell looks like he's picking his teeth, except instead of using a toothbrush or a toothpick, he's sticking a pistol in his mouth.

Man, he really should have pulled the trigger.

I say this, of course, with all due respect. Respect, that is, for the singularly awesome musical burp that was Seattle GrungeTM -- all those damp, hairy Pacific Northwest bands that helped ease my transition from a dumb punk/metalhead into a sanctimonious punk/metalhead who, briefly at least, got to ride the crest of a zeitgeist wave. It was truly retarded music, made by Losers for Losers, and I fucking loved it for dredging up the worst tendencies of hard rock and somehow making them seem like something worth celebrating.

For a moment - a few moments, actually - Soundgarden was one of the bands that assisted in that celebration. While the band was always the most profoundly ridiculous of all the Seattle GrungeTM bands - due mostly to Cornell's irony-free embrace of rock god cliches and his willingness to think it was a compliment when people laughed about his howling faux-Zeppelin-isms - they were also the band that provided the most directly accessible thrills. In fact, up through their major-label debut (Louder Than Love), Soundgarden was the band to beat when it came to nailing the precise balance between stupidity and power that grunge eternally sought to deliver. Kim Thayil's guitar work was both inscrutable and insanely effective, wrapping skronky noise within punishing and powerful riffs, and the chunky plodding of the rhythm section (Matt Cameron and Hiro Yamomoto) rumbled the ground and churned the stomach. And, as anyone who saw a Soundgarden show between 1986 and 1990 can attest, the band was most certainly the loudest and most crushing live act on the (semi-)underground scene.

But stupid is as stupid does, and emboldened by the embrace of a new clutch of metalhead fans who celebrated the band's dumbest musical tendencies, Soundgarden quickly became one of the worst bands on the planet. Although Badmotorfinger was generally praised as one of the more thoughtful albums to come out of Seattle GrungeTM's early flirtations with mass popularity, it was, in fact, only "smart" in the same way that it dressed knuckle-dragging hard rock in high-school-poetry-class "imagery." In this way, it managed to be a completely middle-of-the-road effort, one that seemed brainy to people who didn't know any better and seemed patently ridiculous to those people who wanted their Seattle GrungeTM to be about puking up pills and hating yourself. And it only got worse from there. 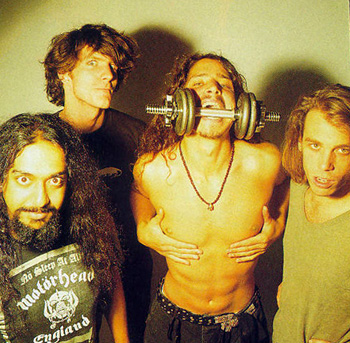 'You look so much cuter with something in your mouth' -- Nickelback, clearly paying tribute to Cornell/Soundgarden, its biggest inspiration.

The band's next (and final) two albums found them evolving (or devolving) into a complete caricature of a "modern rock band," utilizing big-money producers, inane lyricism (see: "Spoonman," "Black Hole Sun," "Ty Cobb" and, well, pretty much everything they did) and music that managed to be the most reductionist rock 'n' roll imaginable, while somehow remaining absolutely devoid of any life, spirit, or sense of fun (or even fucked-up-edness). Even Pearl Jam, the most po-faced, earnest rock band ever, seems like they enjoy what they're doing. During the peak of Soundgarden's career, it always seemed like a goddamned chore.

But hey, it's been 13 years since the band disintegrated on stage in Hawaii, which means there's an entire generation of dumb fucking rock fans who have been bludgeoned by their local Modern Alternative Rock station into believing that Soundgarden was a Very Important Band That Mattered. It also means that precisely enough time has passed so that the day Lollapalooza came to the amphitheater outside of town has been burnished into a treasured memory of many people's younger days. (It doesn't, however, account for Chris Cornell's abortion of a solo career, which, honestly, needs at least another decade or so to get the stink off of it.)

It all adds up to a secret (of course!) reunion show at a Seattle club and a headlining turn at this year's Lollapalooza. Inevitably, the band will discover these reunion shows were "inspiring" and that they've "put all those bad feelings aside" ... as soon as the check clears for the deposits on some never-ending globe-trotting Hits Tour. It's bullshit, of course (see: the Pixies' run through fourth- and fifth-tier markets), but that's not the worst part. This is the worst part: 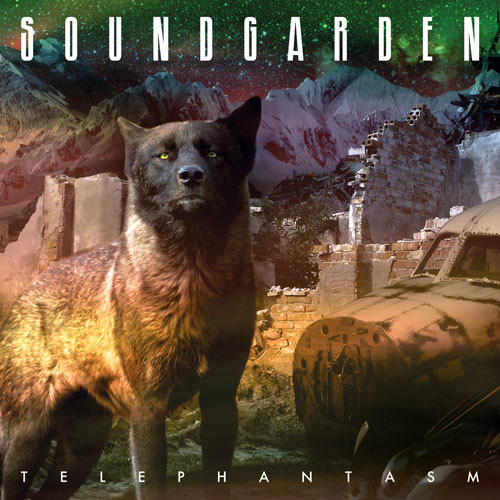 Yep. That's the cover to the band's latest album, a hits collection (their second) that justifies its existence by claiming it's "career-spanning" because it includes a couple token tracks from their SST and Sub Pop days. The emphasis, though, is on the bullshit cock-rock from Soundgarden's peak-popularity era and an abysmal "new" song called "Black Rain" that's actually a shitty outtake from Badmotorfinger. (Seriously, how telling is it that a 19-year-old song can be released as a single and sound completely at home on Modern Rock Radio?)

Oh, and the artwork. Yeah, the guy that does Neurosis' album artwork did it, but he was clearly under orders from some honcho at Universal Megamusicorp to "riff on that wolf thing that the Internet goes crazy for." So instead of something ominous and awesome ...

'Every Atom of Me Will Burn' by Josh Graham, used for Neurosis' 'Given to the Rising' LP.
... Soundgarden fans got: 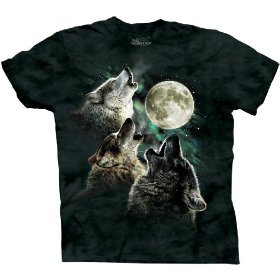 Which, you know, is pretty much the story of this band's awful career. You think you're getting something bitching, brutal, and cutting-edge, but really, you're just getting something that's chintzy, cheesy and yesterday's news.