(adopting smug attitude toward people who have never been in a post-apocalypse scenario) you think safeway is great before the apocalypse.. lol let me tell you safeway is a million times better after the apocalypse

good news guys, a merc i ran into while i was out foraging for a hard copy of something we can use to fap to at camp showed me that george takei is now running a 24-hour radio broadcast for other human survivors of the apocalypse. he gave me the frequency we can tune our radios to, supposedly george takeis social media persona that caused him to become one of the internet's most beloved celebrity content curators translates very well to the radio medium 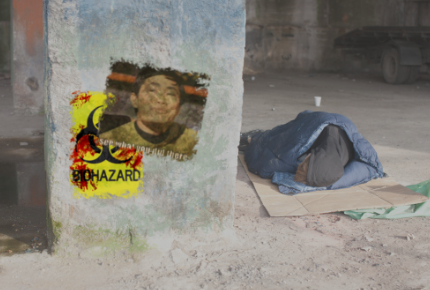 1. proper preparation prevents piss-poor performance. i shouldn't have to remind you which episodes of Community to torrent while there's still time.

3. feeling the heat? i've got four words for you: attain maximum hydration daily. don't let the bar go down! (it helps if you imagine hydration as bar that can go up or down.)

Here's a few of the guys you can meet in the post apaocalypse, and some strats for them as well:

1. Old Guy by himself- Okay, at first I thought this was a regular Old Guy (not much to say about these, sometimes have stories), but this Old Guy was by himself. Turns out it's because of special abilities. Good advice is to throw rocks near this guy and see if he deflects them, or counts them very quickly and does a math problem. That will let you know whether he's a physical or mental kind.

2. Mercenary- Could be a friend or a foe (if the price is right...) Good to have a lot of money when meeting this guy so you can pay him. Be careful of what the currency in the post apocalypse is because if you give him dollars and he wants Ninja Star Coins (more on these later) you might be in for the fight of your life.

3. Radiated Guy- Sad, stay away from this guy. If he has Ninja Star Coins you can take them but don't get his radiation on you.

4. Ninja Star Coins- Money talks... or so the saying goes, so in the way these are like a guy or a "character" of the Post Apocalypse. They're just a regular Ninja Star but everyone agrees they're worth a dollar and to a skilled user "One Death One Dollar" as the saying goes. Personally I think you should practice throwing them at a tree first in a wide open space so you can find them again if they bounce off as you're getting good. When using them as regular money try not to cut yourself on how sharp they are. I use them in both ways equally.

Some of the ideas my zombie thinktank cooked up this last nuclear winter:

1. A Circus: think of all the fucked up mutants that you could round up and show off to your community. For a price of course!!

*stepping into zombie mall to stocku p on supplies + loot the foot locker* the mall is full of mindless fucks!

Post Apoc. Warlord: Get him! There's no way he could backflip away from all your weapons and do pinpoint killing moves. All of those are extinct!

Me: That's what you think 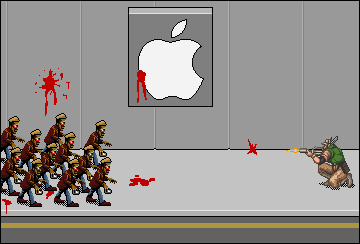 me: fuck. There's a herd of fast zombies coming straight toward me. down this street.

life-affirming bae: [runs up the street ready to do her signature grenade throw while I cover her solemnly, with the two handed gun stance. I used to show off in my younger days by using the one hand style until an incident where my black friend got... well he got eaten by a zombie; now I've realised that's a fiction, a lie sold to use by stupid movies like Rambo. in the apocalypse you have to use the two handed steady gun style of grittier stars like Jason Bourne and Jack Bauer. more effective. she has nice titties nice hair and has the weird cut clothes thing, I thought up a good way to describe it a minute ago but I had to tab on to something else so I don't rememb, basically she looks exactly like Riku from FF10. but with nicer tits. anyway, she runs back with the grenade]

it's not zombies Sam! don't shoot! it's just a crowd of hipsters coming to get supplies for the winter from the apple store on this street! don't shoot them!

Thanks to g0m for the images! He also writes lots of funny words; you can find all his articles here!