As Samus led him down the corridors and winding stairs down to the cargo hold to what she called the 'Suit's Room,' Jon was crafting an image of what he expected it to be: A bright immaculate white room, round maybe, with that massive famous orange suit standing tall on a platform.

What he found himself standing in instead looked more like some disorganized mechanic's garage. The suit was lying on a massive table in the middle of the room, its pieces apart and laid out roughly in the correct order. It was bigger than he imagined, so big compared to her. It wasn't as bright as he had imagined; up close he could see hundreds of tiny dents and scuffs. There were tool chests and rolling carts with what seemed to be suit parts and munitions scattered around the large room. The largest wall was covered by dozens of different-looking 3-foot cylinders. A stained green jumpsuit hung on a hook by the door, next to what looked like a child's blue wetsuit. There were strange metal pieces and machine parts that he didn't recognize everywhere.

"You look a bit disappointed." She said as she walked over to the table and sat down next to the suit's helmet.

"What did you expect?"

He laughed. "Well, whenever I would imagine you putting on the suit, I guess I had this image in my head of you standing on a pedestal with your arms stretched out, and a bunch of robot arms shooting out of the walls and throwing the suit onto you."

She laughed and scoffed. "Yeah I wish! This thing is a complete pain in the ass to put on, especially alone. The fastest I ever did it was twenty minutes, and I don't think I could ever do that again. You ever wake up late and have to get dressed in a hurry, and you end up sweating in your suit before you even leave your home, and then you just feel gross and uncomfortable for hours? I take my time now, getting into this things sweaty sucks."

"I think I know what you mean. Is it uncomfortable?"

"Not most of the time. It's climate controlled, but some planets are really hot and some are really cold. Some are covered in tiny geysers that spout massive clouds of corrosive acid everywhere all the time for no reason."

"I tend to stay away from places like that. What are those?" He pointed to the cylinders on the wall.

"Those are my barrels. The arm cannon there holds three barrels at a time, so I have to choose which ones to install before I head out."

"And they all do something different?"

"What does that cool-looking one there do?"

"That would be my Ice Beam, when it works, which is when I can get the fuel for it."

"An ice beam? For freezing people? That seems a bit silly."

Samus smiled. "It's actually designed to put out tank fires and the like at a distance, save people from burning in their blown-up vehicles or crashed ships, but I guess you could use to freeze someone if you wanted to."

"That's pretty cool. Where the hell did you get all of this stuff?"

"You know that old man we were talking about?"

Jon smiled. "Alright then, keep your secrets, I have plenty of time to crack you." 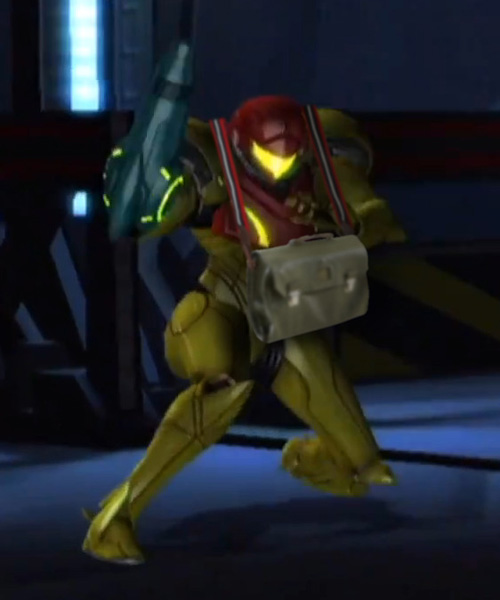 Jon noticed what appeared to be an oversized olive drab colored canvas messenger bag laying in the corner of the room. "What's that?"

"That's my purse. The suit doesn't exactly have pockets and sometimes I need to carry extra things; more barrels, munitions, one time I carried a person."

Jon smiled at the idea of this giant sleek mech suit running with a stupid-looking messenger bag full of rockets bouncing off its hip.

"I'm guessing not too many people have seen the suit like this."

"Well. thank you for showing it to me."

"No problem. Let's go upstairs. We can eat and have a drink and I'll tell you about my last job."