Cards Against Humanity: The Experience! 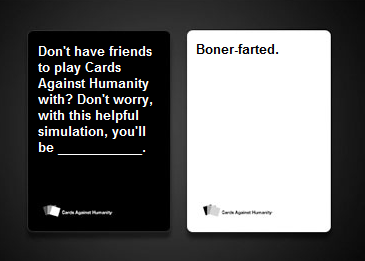 Have you not played this game before? It's like apples to apples, but with a very very dark sense of humor.

there's some dark stuff going on here so get ready! try not to get offended its just a game

*draws card
*smiles softly because i now have the card to end all cards
*places down "two midgets shitting in a bucket" for the next black card, regardless of the prompt

"'After the earthquake, Sean Penn brought Sean Penn to the needy children of Haiti' haha oh man that egomaniacal dick head totally would do someting like that"
"Who's Sean Penn?"
"Uh I think like a singer or something"

I guess this racist joke is OK since it's printed on a card.

*Plays handwritten card with slur on it*